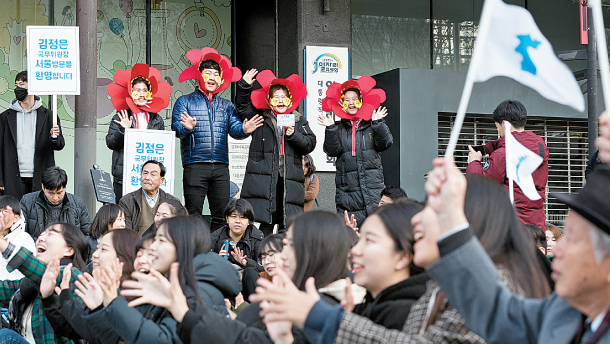 South Koreans stage a rally praising North Korean leader Kim Jong-un in front of the KT building in Gwanghwamun Square, central Seoul, on Sunday. The rally was organized by the Paektu Praise Committee, a radical activist group. Participants in the rally wear flower headpieces as they hold up signs welcoming Kim’s possible visit to Seoul. [NEWS1]

The rally was organized by the Paektu Praise Committee, a radical activist group. It was not stopped by police even after conservative groups filed complaints against the organization for praising the North Korean leader, which is a violation of South Korea’s National Security Law.

About 50 members of the Paektu Praise Committee participated in Sunday’s rally. During the protest, members praised Kim in speeches and dedicated a dance performance in his name. Some of the speakers were children and teenagers.

“I was deeply touched after seeing the people of North Korea welcome [South Korean] President Moon Jae-in and after witnessing the careful consideration put into [Moon’s] visit by Kim and his wife Ri Sol-ju,” said one teenage speaker. “We also want to enthusiastically welcome Kim when he comes to visit.”

During Moon’s third summit with Kim in Pyongyang in September, the South Korean president invited Kim to visit Seoul.

One speaker took to the mike to announce that “the National Security Law no longer exists” while also denouncing conservative political figures like Rep. Na Kyung-won and Hong Joon-pyo for their views on North Korea.

The Paektu Praise Committee was organized on Nov. 7 to encourage Kim’s visit to Seoul. The group has since been reported to the Supreme Public Prosecutors’ Office three times by conservative civic groups like the Taegeukgi Revolution National Movement Corps for violating the National Security Law.

“The core value of progressive politics is human rights, but it is ridiculous that the committee is siding with Kim who suppresses the North Korean people’s human rights,” said Park Gyeol, a representative from the conservative Dawn of Liberty party.