Two artists of different generations who both use fragmentary images from popular culture for their works created through the classical medium of painting are each holding solo exhibitions this month.

The first is 51-year-old Lee Dongi, who is regarded as Korea’s quintessential pop artist - though he rejects the label “pop artist.”

The other is Noh Sangho, 32, who is best known for creating the album cover art for indie band Hyukoh.

Lee’s ongoing solo show “Lee Dongi: 2015~2018” at Pibi Gallery in Samcheong-dong, central Seoul, focuses on the artist’s “Eclecticism” series and “Abstract Painting” series, rather than his “Atomaus” series, which brought him fame in the 1990s.

“I created the character partly to talk about how Korean pop culture is heavily influenced by Japan and the United States and the critics also focused on that,” Lee told the press at the gallery earlier this month. “But since then I’ve been putting Atomaus in various situations in my paintings, using him as a kind of actor.”

“I started these paintings also because of a rebellious spirit against my professors at that time, who were all masters of abstract paintings,” he added. He graduated from the prestigious art college at Hongik University and also obtained master’s degree at the university. He learned from famous dansaekhwa, or Korean monochrome paintings, artists such as Park Seobo and Ha Chong-hyun.

“But, in fact, they didn’t express opposition to my art,” Lee continued. “I also had interest in abstract paintings deep in my heart. That led me to create the ‘Eclecticism’ series and the ‘Abstract Painting’ series later.”

The “Eclecticism” series combines the diverse images of comics, ad campaigns and propaganda with images in an abstract expressionist style. The “Abstract Painting” series are compositions of Ben-Day dots and mosaics of color fields, which look like a magnified magazine page, while at the same time like a pure abstract painting.

“I have some encyclopedic desire to express both the sublime of abstract art and the realism of pop culture on the same canvas,” Lee said about his “Eclecticism” series. 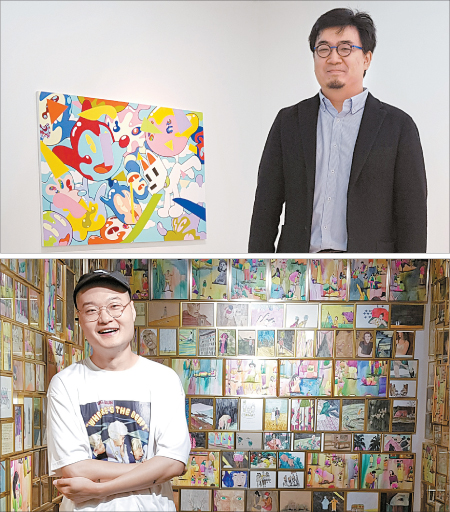 From top: Artist Lee Dongi at Pibi Gallery and artist Noh Sangho at the Arario Museum in Space. [MOON SO-YOUNG]

Meanwhile, Noh presents a vast collection of paintings - 1,500 pieces in total - at the Underground Gallery in Arario Museum in Space in central Seoul.

Most of the works are A4-size paintings, which the artist painted daily based on images he encountered on the Internet or social media.

Noh said he painted six to eight pieces daily and that the exhibit features works painted since the beginning of this year.

Asked why he reproduces images by painting them instead of just downloading them, he said, “I think I’m a filter. A very thin, fluttering filter but still a filter. So, the images, when they come through the filter, are different.”

The exhibit also includes the original painting he made for cover of Hyukoh’s sixth album.