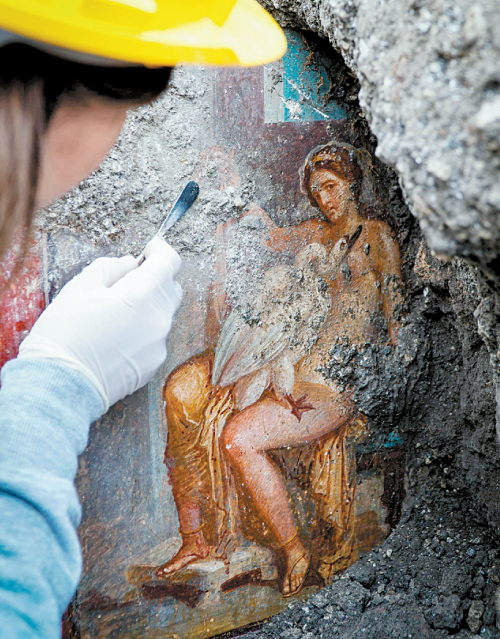 ROME - Archaeologists have found a fresco in an ancient Pompeii bedroom that depicts a sensual scene of the Roman god Jupiter, disguised as a swan, and a legendary queen of Sparta from Greek mythology.

The figure of Leda being impregnated by the god in swan form was a fairly common theme for home decoration in Pompeii and Herculaneum, another town destroyed in A.D. 79 by the volcanic eruption of Mount Vesuvius near present-day Naples.

But Pompeii archaeological park director Massimo Osanna praised this fresco as exceptional since it was painted to make it appear Leda was looking at whoever saw the fresco upon entering the bedroom.

The fresco’s details include a depiction of Leda protecting the swan with her cloak as the bird sits on her lap.

Osanna noted the fresco’s context of the Greek “myth of love, with an explicit sensuality in a bedroom where, beside sleep, there could be other activities.”

The fresco, with its colors still remarkably vivid, was discovered Friday during ongoing work to consolidate the ancient city’s structures after rains and wear-and-tear in past years caused some ruins to collapse.

The bedroom is located near a corridor by the entranceway of an upscale domus, or home, where another splendid fresco was discovered earlier this year. AP