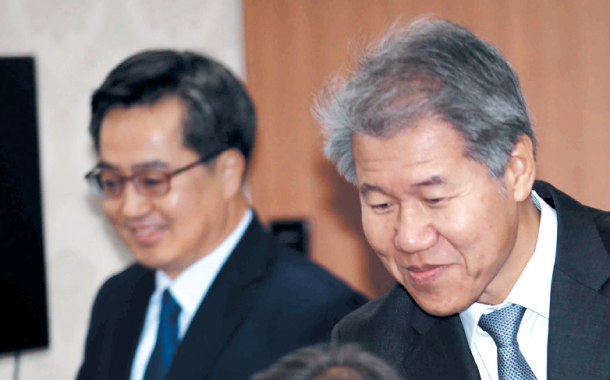 Kim also said that after his successor Hong Nam-ki takes over, which will occur following National Assembly confirmation, it will be important to hold meetings between ministry officials and the Blue House. The debate between them should be fierce, but ultimately they should speak with a unified voice when addressing issues publicly, he added.

On Nov. 9, the Blue House replaced both Finance Minister Kim and Blue House policy director Jang Ha-sung. The two were in conflict over a wide range of issues, from the minimum wage to job creation.

While Finance Minister Kim called for a slowdown in the increase of the minimum wage, as higher wages are affecting job numbers, Jang believes that it will take time before income-led growth actually helps the economy and that employment numbers will improve eventually.

Income-led growth, which includes raising the minimum wage, has been the central tenet of this administration’s economic policy.

Because of the discord between the two officials, the Blue House was said to be planning both of their retirements.

Kim said that at the meeting on Tuesday he discussed a wide range of economic issues, from jobs to regulatory reforms.

“We exchanged thoughts on many issues, including passing next year’s budget by the end of this year, problems with tax reforms and next year’s economic policy direction, which will be the job of the new finance minister,” Kim said.

The Finance Minister said that he is concerned that the nation is losing its economic vitality and that investment has been declining.

“We are at a point where we should push innovative growth, and that would include regulatory reforms that will breathe life into the market and companies,” Kim said.

“Innovative companies are the essential to economic growth and job creation,” Kim said.

“There is a need to implement measures that will not lead to a zero-sum game but to a plus-sum game in areas where there is a vivid clash of interests.”

He said that his economic team has been working on fostering an atmosphere and creating conditions that will help establish an ecosystem for innovative growth. This includes the formation of innovation funds.

“I expect the next economic team, with the existing foundation, will achieve real results,” Kim noted.

He advised the new economic team to focus on policies that will not only continue to encourage the creation of new innovative companies, but also help these companies advance and expand.

The Blue House policy director previously stressed the importance of speaking with one voice, saying that the nation’s economic policies will be directed in a unified fashion by the finance ministry.

Also in attendance were ministers from other economic ministries, including the Land, Infrastructure and Transport, SMEs and Startups and Science and ICT ministers, and the Minister of Health and Welfare.