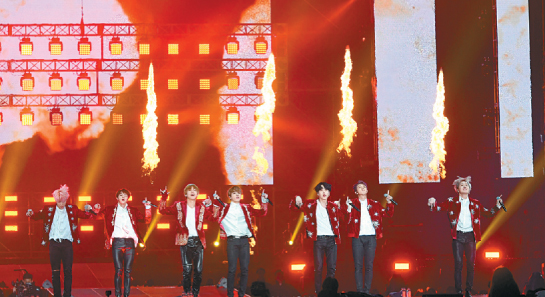 Boy band BTS once again surprised the world by placing 10th at the U.S. weekend box office with its documentary film “Burn the Stage: the Movie,” which was released in more than 70 markets on Nov. 15. This is the first time a Korean film has landed in the top 10 at the American box office.

The film, which features interviews with members of the group and behind-the-scenes footage of their “2017 BTS Live Trilogy Episode III: The Wings Tour,” raked in $2.41 million from Friday to Sunday and grossed a total of $3.64 million from Thursday to Sunday, according to Box Office Mojo.

A week before its release, the film had sold one million presale tickets worldwide.

In addition to the band’s success at movie theaters around the world, BTS has caught the attention of one of the world’s biggest singers. On Tuesday, British magazine Heatworld posted a short interview with singer Ed Sheeran on Twitter, in which he talked about wanting to collaborate with the band.

“I actually wrote a song that I think they might be messing with,” he said, responding to a BTS fan’s tweet. “I heard this the other day. I don’t know. I really like BTS though, I think they’re great.”