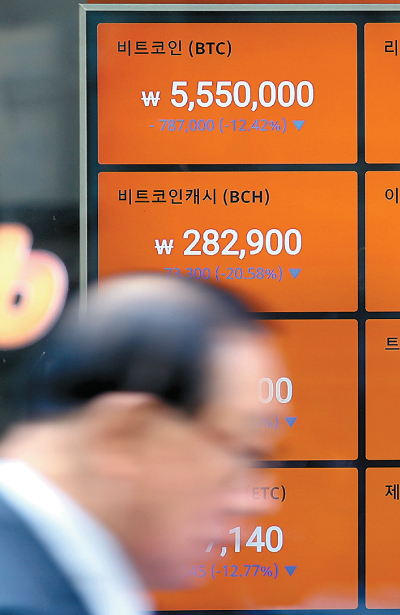 A signboard at a cryptocurrency exchange in Seoul shows the price of different cryptocurrencies, including Bitcoin, on Tuesday. [YONHAP]

The price of Bitcoin crashed on Tuesday, falling below the $5,000 mark on major exchanges globally as a brutal sell-off continues against the backdrop of hostile regulatory and market conditions.

Korea’s exchanges also saw the price of Bitcoin plummet to its lowest point this year, trading at 5,297,000 won ($4,698) on Bithumb, the country’s largest cryptoexchange by volume of transactions, as of press time.

The figure is down 15.07 percent from the previous day. Other tokens such as Ethereum and Ripple also plummeted.

The crash was, in part, prompted by the U.S. Securities and Exchange Commission (SEC)’s decision to penalize two crypto start-ups, Aircoin (Airfox) and Paragon, for failing to fulfill registration requirements on their initial coin offerings (ICOs). The two firms were required to pay hundreds of thousands of dollars worth of fines and compensate investors.

The decision, which indicates the regulator’s heavy-handed approach toward ICOs and cryptocurrency in general, shook the market.

In Korea, financial authorities banned ICOs in September last year when the number of investors reached its peak.

The Financial Services Commission (FSC) also asked local banks to stop issuing new virtual accounts required for buying and selling cryptocurrencies late last year. Chairman Choi Jong-ku, however, recently struck a more approving tone, saying that “it is up to banks [whether to issue the bank accounts],” in a national audit last month.

As for ICOs, Choi maintained a tough stance, saying that the offering “contains a lot of risks.”

Another catalyst for the crash is the ongoing drama surrounding Bitcoin Cash’s hard fork. On a blockchain, a hard fork is a software upgrade that requires the agreement of all participants in the chain. If everybody does not agree - which is inevitably the case - the blockchain essentially splits into two different databases, one following the old system and one the new.

In the case of Bitcoin Cash, the token has split into Bitcoin ABC and Bitcoin SV, but the separation creates uncertainty and doubt among investors.

Willy Woo, a trader and analyst of cryptocurrency, warned in an interview with Forbes that the bearish investment sentiment could continue throughout the first two quarters of 2019.

“Until we see some new catalysts to change the trend, we will continue the bear market into mid-2019. Bitcoin will capitulate or trade sideways while Altcoins pump. Most of the gains made from alternative cryptocurrencies will flow into BTC, and by then, Bitcoin should achieve its bottom and begin an uptrend before the halving in 2020.”

Faced with the downfall in prices and volume of transactions, some digital token exchanges closed or moved outside of Korea.

Zeniex, an exchange that opened just six months ago, decided to cease operations this month after the Financial Services Commission and the Financial Supervisory Service accused it of violating capital market laws in selling a cryptocurrency investment fund.

The regulators said that Zeniex failed to register the product with regulators in advance.

The fund product, launched in September, raised 1,000 Ethereum in just two minutes after its launch.

Major trading sites are also looking to overseas markets in search of a kinder regulatory environment. Upbit plans to launch in Singapore soon.