How to heal the losses

How to heal the losses 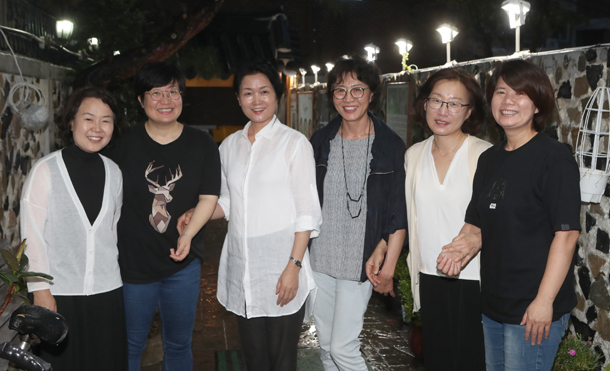 Kim Hye-jeong, center, and her friends meet at a restaurant in Seoul. [JOONGANG PHOTO]

Suicide survivors are families who lose their loved ones due to suicide. The phrase could easily be misinterpreted as describing someone who has survived a suicide attempt, but families often suffer from extreme shock and pain. U.S. Senator Harry Reid’s father committed suicide and the Democrat senator introduced a resolution to designate National Survivors of Suicide Day in 1999. It is a day for the friends and families of those who committed suicide to support each other and heal their losses.

“Don’t give up the joy and happiness that we expelled from our lives and accept all emotions equally. You can laugh and dance, not just cry,” she told some 30 survivors of suicide attending the event. She thinks it is the only way to keep hopes in life and prevent extreme choices.

The event began with a shared meal, an act of opening up and remembering the value of life. Then, a time to talk about the death of family members and grief followed. It was healing and consolation. They hung memos confessing their inner thoughts and shouted together, “Don’t tell me to forget. I still miss and love you.”

“Thank you for being next to me when I struggle.” Kim said. “We lost a family member because these words of comforts were lacking. When we have them, we can retrieve good memories and overcome the loss.”

Three months ago, Kim and her group began supporting other survivors. In the attic of Kim’s house, they have meetings and help each other overcome grief through a “condolence process.” They believe that survivors who overcome pain can best help those who are still suffering.

Every year, 13,000 people commit suicide in Korea and at least 80,000 lose their loved ones to suicide. Nearly 50 percent of survivors consider suicide as well. More support groups are needed to help their well-being. Survivors of suicide are not strangers to be pitied, but neighbors that need to be cared for.