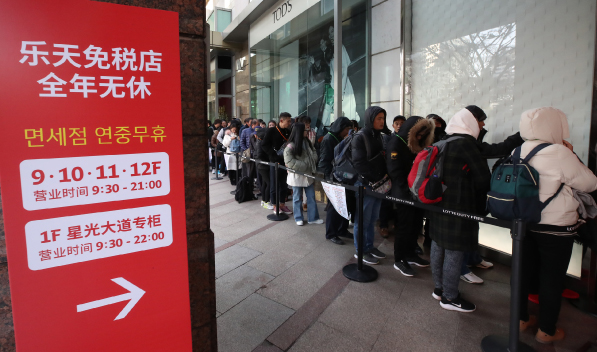 A sign points the way to a duty-free shop. Despite a ban on group travel from China, duty-free sales are on their way to record highs as “daigongs,” Chinese resellers, increase buying. [YONHAP]

Local duty-free sales are likely to set a new annual record this year despite Chinese group tour traffic not having fully recovered.

According to the Korea Duty Free Shops Association, duty-free store operators made $1.44 billion in October, a 28.6 percent increase year on year. This takes Korea’s total duty-free revenue between January and October to $14.3 billion, surpassing 2017’s full-year revenue of $12.8 billion.

“The local duty-free market was 14 trillion won [$12.4 billion] in size last year - some forecast this year will reach a new all-time record of 18 trillion won,” said a source at one of Korea’s largest duty-free store operators.

The growth is meaningful considering that Chinese group tours are not fully back in the market.

Industry watchers and analysts attribute the increase in duty-free sales this year to “daigongs,” or individual Chinese merchants that purchase Korean goods and resell them at home.

Before Chinese group tours were banned in March 2017 after Korea’s deployment of the U.S. Terminal High-Altitude Area Defense antimissile system, they were a major source of revenue for local duty-free stores. As traveling to Korea for Chinese became more difficult, the reselling business began to grow.

“Revenues are going up this year but we’re still waiting for group tours to come back,” said another source at one of top three duty-free companies.