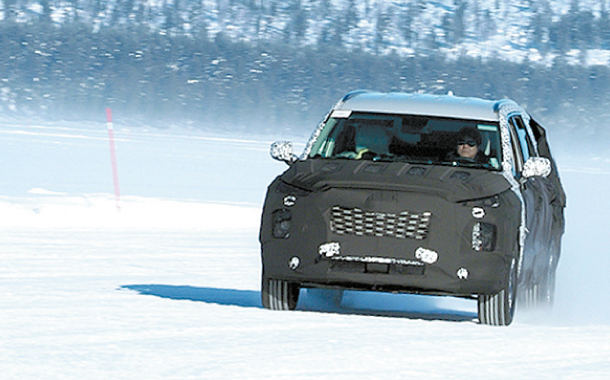 On Tuesday, Hyundai Motor said that its Palisade SUV will come with a new feature dubbed Snow Mode that is designed to help the vehicle navigate snowy terrain by redistributing power to its wheels.

The new vehicle will be the first SUV in Korea to come with Snow Mode or an equivalent function, according to Hyundai Motor.

The system helps redistribute driving power to the wheels so that a car stuck on a snowy road can regain traction.

A video posted on a Hyundai Motor blog on Tuesday shows the Palisade crossing uneven snowy terrain. At one point, the car’s left rear wheel is left spinning in the air, but the Snow Mode quickly recognizes the lack of traction and transfers the driving power to the other wheels. Later in the video, power is shifted to the right rear wheel to give the vehicle a boost, enabling it to get back onto the road.

The carmaker said the SUV model has been tested on 6,000 kilometers on snowy terrain in Arjeplog, Sweden over the past two years.

The large Palisade SUV will launch on Nov. 28 at the LA Auto Show.