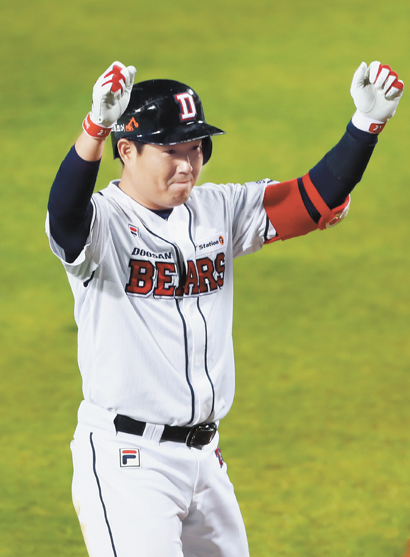 Yang Eui-ji of the Doosan Bears celebrates after a two-run single during Game 6 of the Korean Series at Jamsil Baseball stadium on Nov. 12. [YONHAP]

A total of 15 players are out in the free agent (FA) market looking for teams to play for in the 2019 season.

This year, 22 players were eligible to become FAs but only 15 registered to do so. The seven players choosing - or being forced - not to become FAs is the biggest number since 2014, when the KBO players eased FA regulations.

A high school graduate must play nine full seasons before becoming an FA, while a college graduate need only play for eight seasons.

Of the seven, Lim Chang-yong of the Kia Tigers and Jang Won-sam of the Samsung Lions were released by their clubs before the deadline and so automatically lost their eligibility. Chang Won-jun of the Doosan Bears, Lee Myung-woo of the Lotte Giants and Park Han-yi and Son Joo-in of the Samsung Lions all chose to stay with their current teams. Park Ki-hyuck of the KT Wiz chose to continue his career off the field as a club’s new base-running coach.

Due to this, only 15 players - four pitchers, two catchers, five infielders and four outfielders - are out in the market looking for teams to play for.

Catcher Yang Eui-ji of the Bears is considered the biggest player in the market. Completing the season with an impressive .358 batting average with 23 home runs and 77 RBIs, Yang is expected to set a new record as the KBOs highest paid catcher, which Kang Min-ho of the Lions currently holds at 8 billion won ($7 million).

However, although Yang has undoubtedly established himself as the best catcher in the KBO in recent years, teams are hesitant in signing him due to the significant increase in FA signings over the past few years. Last season, some KBO clubs spent billions signing big name players like Kim Hyun-soo of the LG Twins, Kang, Hwang Jae-gyun of the Wiz and Son Ah-seop of the Giants. None of those teams advanced to the postseason.

Surprisingly, it was the teams that spent the least amount of money in the free agent market last year that made it to the postseason. As a result, this season many clubs have announced they will focus on re-signing their existing players rather than splashing on expensive additions.

As there are 15 free agents this year, each team is allowed to sign a maximum of two FAs from other teams.

While clubs are still hesitant to sign any big name FA players, the market for foreign players has already been very active.

The Hanwha Eagles were the first team to complete their overseas signings for the 2019 season. The Eagles decided to retain Jared Hoying, parting ways with its two foreign pitchers - Keyvius Sampson and David Hale. Instead, they’ve signed Warwick Saupold and Chad Bell.

The Twins have signed Casey Kelly, but they have yet to reveal which of their existing pitchers is being released. The Kia Tigers only has one foreign spot left on their roster. On Tuesday, the Tigers announced the signing of pitcher Jacob Turner and outfielder Jeremy Hazelbaker.

The Wiz has already signed Raul Alcantara and the SK Wyverns have brought in Brock Dykxhoorn.