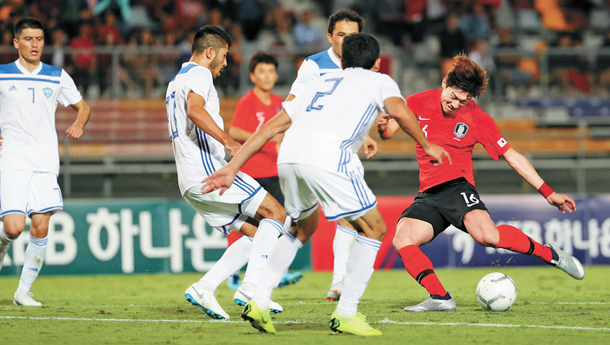 Hwang Ui-jo, right, takes a shot during a friendly match against Uzbekistan at the Queensland Sport and Athletics Centre (QSAC) in Nathan, Australia on Tuesday. [YONHAP]

Korea has discovered more options for its football squad ahead of the 2019 Asian Football Confederation (AFC) Asian Cup after completing its November friendly matches with inspiring results.

Korea, led by head coach Paulo Bento, wrapped up its Australia trip on Tuesday with a 4-0 win over Uzbekistan at the Queensland Sport and Athletics Centre (QSAC) in Nathan, a suburb of Brisbane, Australia. Before the Uzbekistan friendly, Bento’s side played to a 1-1 draw with Australia.

The two friendlies were Korea’s tune-up matches for the 2019 Asian Cup, which will kick off in the United Arab Emirates on Jan. 5. They were also Korea’s first two matches away from home since Bento took over the helm in August.

Korea will face Saudi Arabia in Abu Dhabi on Dec. 31 for a final tune-up, but the two friendly matches in Australia were considered the last test for Korean players before Bento assembles his squad for the Asian Cup.

Korea now has three wins and three draws under Bento.

Among the 24 players who were selected for the friendly matches in Australia, only goalkeeper Kim Jin-hyeon, full back Lee You-hyeon and midfielder Kim Seung-dae were not used.

Considering that Kim Jin-hyeon and Kim Seung-dae previously played under Bento, that leaves Lee as the only player who hasn’t been tested in a competitive match.

For Bento, his main task was to find reliable stalwarts who can fill the void left by missing core players and who fit into his football style. And some players have made the case through the November friendlies that they deserve a spot on the Asian Cup roster.

Among them are veteran Lee Chung-yong, who started both matches against Australia and Uzbekistan. The 30-year-old, who plays with German Bundesliga 2 club VfL Bochum, returned to the national team for the first time since June, but he proved his skills are still useful.

Although he failed to produce a goal or an assist, Lee, an attacking midfielder with 81 caps, was able to facilitate the team’s attacks with key passes.

In the center of midfield, Hwang In-beom became a reliable option for Bento’s team. With Ki and his main partner, Jung Woo-young, absent, Hwang served a key role in the middle, moving the ball forward and helping the attackers upfront with his tireless runs.

Against Australia, Hwang struggled in the initial phase of the game alongside Koo Ja-cheol. But after Koo was replaced by Ju Se-jong, he started to find his rhythm and his game improved.

Kim Min-jae and Jung Seung-hyun arose as promising candidates to partner Kim Young-gwon in central defense. Previously, Jang Hyun-soo was Bento’s first-choice center back along with Kim Young-gwon, but he was recently slapped with a lifetime ban from the national team after doctoring his community service records.

Kim Min-jae delivered a fine assist to Hwang Ui-jo in Korea’s 1-1 draw against Australia. Jung, who is a starting center back for the 2018 AFC Champions League champions Kashima Antlers, showed his defensive skills to help achieve Korea’s clean sheet against Uzbekistan.