Korea’s household debt reached a new high in the third quarter despite the recent slow pace of growth, surpassing the 1,500 trillion won ($1.3 trillion) level for the first time. 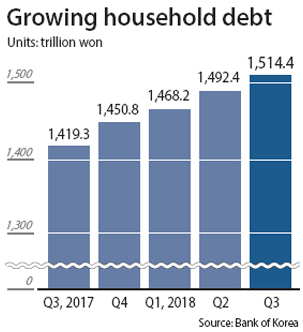 The Bank of Korea said on Wednesday that the country’s outstanding household debt, which includes loans from banks and other financial institutions as well as credit card spending, stood at 1,514.4 trillion won between July and September, up 22 trillion won or 1.5 percent from the previous quarter.

The accumulated debt may be higher than ever before, but things appear less dire in terms of the size of the increase.

The quarterly increase of 22 trillion won is the lowest third-quarter record since 2014. Analysts believe that the eased pace is due to the government’s push to tighten lending criteria as part of efforts to temp down the real estate market.

When compared to the same quarter last year, the growth rate of household indebtedness was 6.7 percent, the lowest since the fourth quarter of 2014.

Still, the increase trend remains above the income growth rate at 4.2 percent as of the second quarter, which put the central bank on edge.

“Although the quarterly increase has slowed, debt grows faster than income growth,” a source at the Bank of Korea said.

“That is a matter of concern and will likely increase financial imbalances,” the source said.

Choi Jong-ku, head of the Financial Services Commission, echoed the view, saying that debt levels continue to be contained.

“The increase rate has decelerated,” he said on Wednesday, “But it needs to be further reduced to the 5 percent rage, a growth rate of nominal gross domestic product (GDP).”

The third quarter announcement came after a meeting aimed at managing increasing debt was held on Monday.

The Financial Services Commission and the Financial Supervisory Service assessed that lending for real estate has stabilized thanks to the government’s tougher restrictions on loans.

The amount of loans taken out since the beginning of this year is equivalent to 60 percent of last year’s figure, according to the regulator.

The amount of new non-mortgage loans, including unsecured loans, increased 14.4 percent from 29.9 trillion won in the first ten months last year to 34.2 trillion won this year.