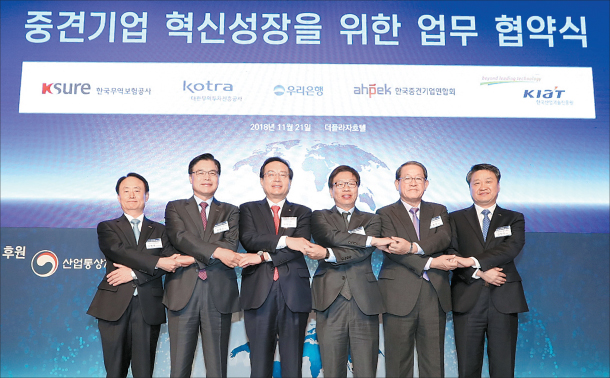 Woori Bank CEO Sohn Tae-seung, third from left, poses with other attendees at an event held to mark the bank’s support for small and medium sized companies. The event was held at the Plaza Hotel in central Seoul on Wednesday. [WOORI BANK]

The financing will come in the form of loans with favorable interest rates, according to a source at Woori.

“We plan to support 300 companies. The maximum loan size for each company will be 30 billion won,” the source said.

The source, who is in the corporate strategy division, added that a business association and a government agency will recommend candidates.

“We will let the Association of High Potential Enterprises of Korea (Ahpek) and the Korea Institute for Advancement of Technology (KIAT) recommend companies,” the source said, adding that the bank will also utilize its own screening process.

Ahpek is a group that represents firms with at least 500 billion won in capital, while the KIAT is a state-funded agency tasked with commercializing promising technologies held by individuals and corporations.

Along with the funding, Woori will also help SMEs expand into overseas markets by matching them with the appropriate agencies.

“We will provide full support for the SMEs to help them develop into global companies,” he said.

To introduce the initiative, Woori held an event at the Plaza Hotel in central Seoul, attracting some 300 participants from SMEs and trade-related bodies.

Among those attending were Kwon Pyung-oh, CEO of Korea Trade Investment Promotion Agency, and Kim Hak-do, president of the KIAT.