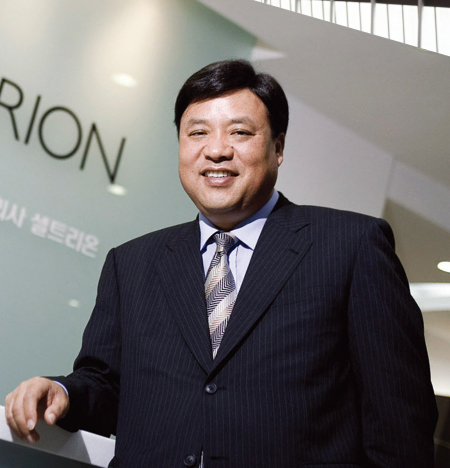 Celltrion Chairman Seo Jung-jin has been embroiled in Korea’s latest gapjil scandal after accusations emerged that he abused flight attendants on a Korean Air plane en route from Los Angeles to Incheon on Nov. 16.

The gapjil - a Korean term that refers to a person misusing their power or authority over somebody in a weaker position - incident was made public after JTBC aired an exclusive report on Tuesday that cited an internal report from Korean Air. Celltrion, a 27-year-old biosimilar developer with the fourth-largest market capitalization on the main Kospi, denied the allegations.

JTBC said that Seo, who was traveling in first class, tried to invite his employees who were seated in economy to first class. When a senior flight attendant blocked their entry, citing regulations, Seo began lashing out at the person, talking down to the chief flight attendant and making vulgar comments.

“Is your service worth a flight ticket costing 15 million won [$13,265]?” he asked, according to the report. He reportedly complained that there weren’t even any young or pretty flight attendants to be seen and said that Korean Air had just lost 6 billion won in annual revenue as a result of the incident.

Celltrion denied the allegations, running a detailed explanation of what happened on the plane on its homepage.

A spokesman with the pharmaceutical firm said that there were “some conversations that may sound uncomfortable” over the course of an exchange of opinions between the chairman and airline staff, but there were no violent words or vulgar language. Seo ordered his ramen to be remade just once, according to the company’s explanation.

The company went on to say that Seo usually feels sorry for traveling in first class when other employees are in economy and that it is company tradition for him to invite his staff to a “resting place” for tea time as a method of expressing his regret.

But the company acknowledged that the chairman asked three employees from economy class to the cocktail lounge for first-class customers, and after being warned by the chief flight attendant, Seo and the employees moved near the economy class kitchen and drank tea together.

“Chairman Seo wants to apologize that he failed to take into account that his behavior to prioritize his employees, who were tired from a long-distance business trip, could lead to misunderstanding from others on board,” the message on the homepage said.