Queen biopic is a crazy little thing called a hit

Queen biopic is a crazy little thing called a hit 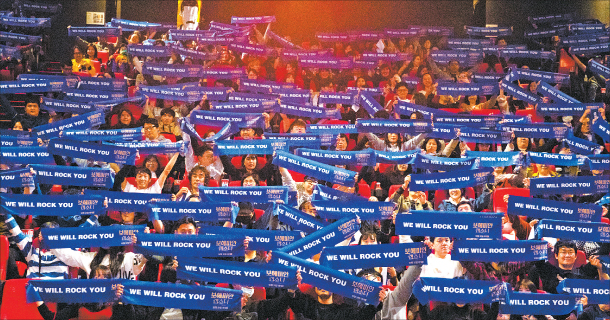 Audience members hold up signs at a sing-along screening of “Bohemian Rhapsody” at a CGV theater in Yongsan District, central Seoul, on Oct. 24. They were invited to sing along with Queen’s popular hits during the preview screening. The movie sold a total of 3.27 million tickets in Korea as of Monday. [20TH CENTURY FOX KOREA]

After a Friday evening screening of “Bohemian Rhapsody” at a packed theater in Gangnam District, southern Seoul, a woman in her 50s gave a standing ovation. “Oppa [an endearing term for an older male],” she called. “You are so great! I love you!”

Korea has found somebody to love this season and it’s Freddie Mercury, lead singer and central figure in “Bohemian Rhapsody,” a biopic of the British rock band Queen, known for its countless string of Top 40 hits in the 1970s and ’80s. Queen’s heyday may be distant chronologically, but in Seoul, it seems right about now. Queen hits are playing in taxis, in barber shops, and Korean audiences have been the third largest for “Bohemian Rhapsody” around the world. Each week since its release, the number of tickets sold has increased rather than subsided, the usual pattern.

And now, theaters are offering moviegoers a rare treat: screenings in which the lyrics are projected on the screens in English and audiences are encouraged to sing along to “We Will Rock You,” “Radio Ga Ga,” “We Are the Champions” and all the rest.

“Bohemian Rhapsody” has been a bona fide hit around the world, with box office receipts of $384 million as of last week. It’s one of those films that enraptures the public but not the critics. The New York Times’ review, entitled “Another One Bites the Dust,” called it “A baroque blend of gibberish, mysticism and melodrama ... engineered to be as unmemorable as possible, with the exception of the prosthetic teeth worn by the lead actor, Rami Malek, who plays Freddie Mercury.” The film’s Tomatometer score on website Rotten Tomatoes is only 63 percent. 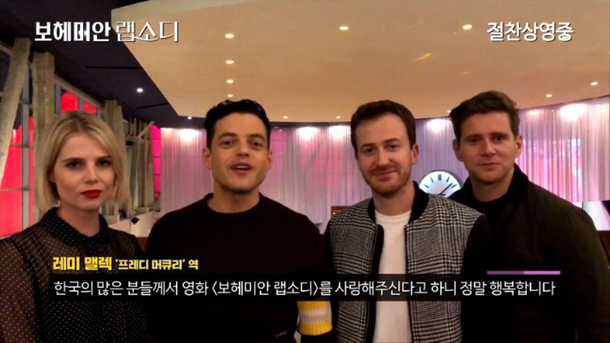 In Korea, the movie sold a total of 3.27 million tickets since its release through Monday, outperforming J.K. Rowling’s “Fantastic Beasts: The Crimes of Grindelwald,” which opened in theaters just last week. It trumped “Mamma Mia! Here We Go Again” to become the best-performing music title of the year. The “Mamma Mia!” sequel sold 2.29 million tickets.

Usually, a film’s performance starts strong and wanes, but “Bohemian Rhapsody” keeps getting bigger and bigger. In its first week, it sold 520,000 tickets, followed by 780,000 the following week and 810,000 in the third.

As of Nov. 18, the Korean box office for “Bohemian Rhapsody” was the third-largest in the world after the United States and Britain. It raked in 29 billion won ($26 million) as of Monday, according to the Korean Film Council.

Being the third largest in the world isn’t actually unique, despite Korea’s small size. Disney discovered the power of Korea’s moviegoers after Marvel franchise films made more here than they expected. Disney makes it a point to send stars in ahead of openings nowadays to get audiences excited.

But the fact that a relatively small movie like “Bohemian Rhapsody” has pulled off such a performance is unusual. There’s something about Freddie Mercury’s story and Queen’s catalogue of hits that has appealed to Koreans of several generations. And that doesn’t happen very often.

Seeing the chance of bringing fans back to see the movie a second, third or fourth time, multiplex chains like CGV and Megabox have started what they call “sing-along theaters,” where audiences are invited to sing, clap and stomp during the screening, as if they are at a concert.

CGV, the nation’s biggest cinema chain, announced the sing-along theater on Nov. 9. It was supposed to be a limited run of a few nights, but demand was so strong it’s keeping them going.

“Seats rarely sell out,” said Hwang Jae-hyeon, a spokesman of CGV. “But seats for the sing-along screenings are usually sold out.” 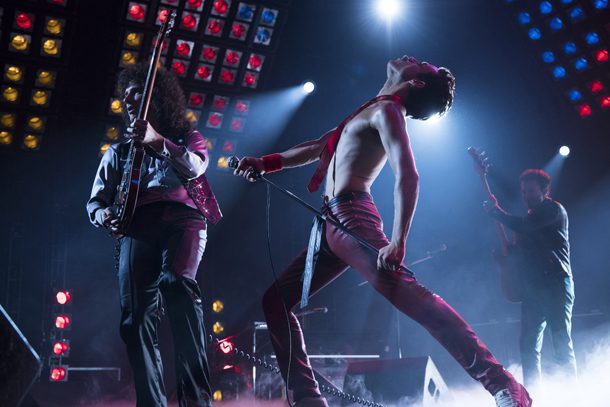 The cast perform in a scene from “Bohemian Rhapsody.” [20TH CENTURY FOX KOREA]

“Audience in their 40s and 50s were higher than usual for ‘Bohemian Rhapsody’ because they grew up listening to the music,” said Hwang. “But the film was also popular among younger audience thanks to word-of-mouth. The common response from younger moviegoers was, ‘I did not know about Queen, and I didn’t realize how many Queen songs I already knew.’” In Korea, as in probably most parts of the world, many of the band’s anthems have been used in movies, television shows and advertisements.

Megabox is holding a special screening Saturday to commemorate the death of Mercury, which happened Nov. 24, 1991. The chain is screening the movie in its nationwide MX theaters, where Dolby Atmos audio is featured. This, as well as some enthusiastic viewers’ willingness to watch the movie over and over again, is likely to further boost the film’s box office in its fourth week.

Korean critics agree with their international colleagues that the popularity of the film is not due to its formal excellence.

“The film has a weak script,” said film critic Kim Bong-seok. “It makes a hero out of Mercury, and intentionally conjures up audiences’ emotions by showing a lot of close-up scenes.

“But it successfully elicits people’s sympathy toward the character, and shows elements that people can strongly relate to,” he said.

“The movie simply chronologically lays out what happened to Freddie Mercury,” said critic Kim Hyung-seok. “Despite that, it invites an audience in emotionally by continuously unleashing Queen’s songs. Not delving too deeply into Mercury’s homosexuality also contributed to raising its commercial viability.”

He added that music helps dramas do well in Korea and cited the box offices of previous movies that relied on music like “La La Land” (3.59 million tickets) and “Begin Again” (3.45 million).

“Korean audiences have shown a rising interest in music movies, which began around a decade ago since the release of ‘Once’ [in 2007]. These days, people show explosive responses towards content that stimulates their emotions, and ‘Bohemian Rhapsody’ is in line with that trend.”