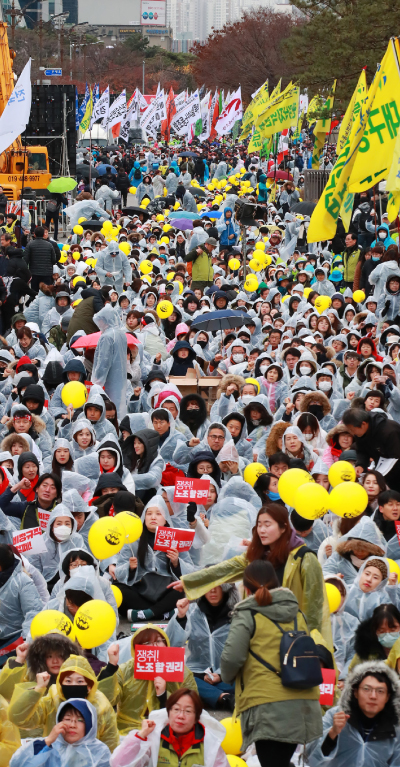 The Korean Confederation of Trade Unions (KCTU) holds a rally in front of the National Assembly in Yeouido, western Seoul, on Wednesday. [YONHAP]

The Korean Confederation of Trade Unions (KCTU) went on a one-day nationwide strike on Wednesday to protest the labor policy initiatives pushed by the Moon Jae-in administration, mobilizing nearly 160,000 union members in 16 regions of the country.

The strike came as tensions had been brewing between labor unions and the Moon government in recent months. This came as a surprise, given that President Moon ran his campaign promising labor-friendly policies.

The KCTU, one of the country’s two major umbrella labor unions, is known for aggressive street rallies that have led to confrontations with the police in the past.

When Moon was elected in May last year, the KCTU released a statement welcoming his election that said the “social meaning of Moon’s election is profound.” The union expressed hope for a meeting with him “to make a country where labor rights are respected.”

The general strike caused assembly lines for Hyundai Motor, General Motors Korea and Kia Motors Group across the country to come to a halt for at least four hours on Wednesday, disrupting production.

The KCTU’s Wednesday strike was its first all-out strike since November 2016, when it mobilized its members to demand that Park Geun-hye, who was president at the time, step down amidst corruption and abuse of power allegations. Park was eventually removed from office in March last year.

The KCTU said it decided to go on strike after seeing momentum for labor rights reform dwindle under the Moon government. The union sees this as a betrayal of its initial high hopes that the Moon government would move fast to improve working conditions and transition all irregular workers in the public sector to a permanent position.

The KCTU expressed particularly deep disappointment on two issues. The government has backtracked on its initial campaign promise to increase the minimum hourly wage to 10,000 won ($8.85) by 2020. It also recently announced that it will push to allow companies to increase or decrease their workers’ maximum working hours depending on the amount of work needed at a given time for six-month periods, rather than the current three months.

For example, a company that makes air conditioner parts could increase its working hours to more than 52 hours a week during the high-demand summer season and then correspondingly decrease them during the winter season.

“We decided to go on a strike because we could not just stand idly by and watch the Moon Jae-in government backpedal on labor reforms and renege on campaign promises for labor rights,” said the KCTU in a statement released on Tuesday.

Another labor policy initiative pushed by the liberal government that has drawn fierce backlash from the leftist labor union involves a joint manufacturing venture planned by Hyundai Motor and the Gwangju Metropolitan Government.

Under the proposed agreement, the city of Gwangju will build a car assembly line in the city by 2020 at the earliest. Hyundai Motor plans to invest 50 billion won in the 700-billion-won project. Hyundai will invest in the city-owned plant under the condition that it will pay Gwangju assembly workers around half of what it pays other Hyundai assembly workers. Once the factory is operational, it is expected to employ around 10,000 workers and create 100,000 more jobs indirectly.

The Federation of Korean Trade Unions, the more moderate of the two major umbrella labor unions, supports the plan. The KCTU, however, has criticized it, saying that it will eventually worsen conditions for other workers. This has further strained relations with the Moon government, which is trying to help Hyundai and Gwangju cut a deal.

The KCTU’s growing dissatisfaction with the government has raised questions for both the Blue House and the ruling Democratic Party over their relationship with the labor union, which is opposed to virtually every government labor policy initiative aimed at helping businesses.

The dilemma is especially acute for the ruling DP, whose floor leader, Hong Young-pyo, is a former KCTU member and labor activist.

“I regret that the KCTU chose to go on a strike instead of resolving labor policy disputes through dialogue. I wish that the [KCTU] can ponder over whether its strike can contribute to solving the many issues facing the country,” said Hong. “I expect a change of attitude by the KCTU, as it is an important member of our economy.”