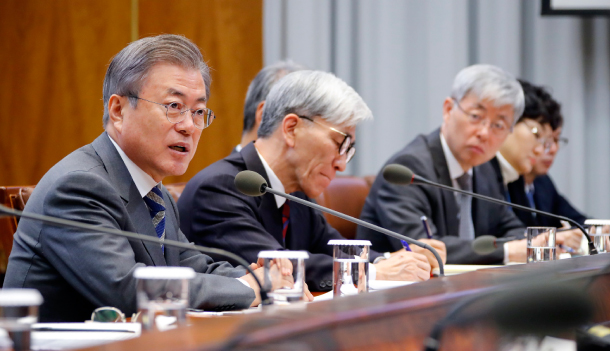 President Moon Jae-in speaks at a meeting with the heads of presidential commissions and advisory committees on Wednesday at the Blue House. [YONHAP]

President Moon Jae-in urged the government to make additional efforts to produce inclusive growth on Wednesday, calling it a challenge that the entire world is facing.

Moon’s call came in a special meeting with the heads of various presidential commissions and advisory committees, including the Presidential Commission on Policy Planning.

“Up until now, each commission helped draw a big map of national policy goals. What the government has to do now is to build an inclusive nation under the map where we will all be well-off,” the president told the meeting at the Blue House.

Ensuring or enabling inclusive growth is one of the key economic policy objectives of the Moon administration.

The country increased its minimum wage by more than 16 percent to 7,530 won ($6.70) per hour at the start of this year, which is in line with its goal. It was the steepest rise in nearly two decades.

“What I wish to especially point out is the fact that inclusive growth, sustainable development and people-oriented growth that we are currently striving for are not special values that only the Moon Jae-in government in the Republic of Korea is pushing for. They are issues and challenges common to the international community and all nations in the world,” he said according to the Blue House pool reports.

The president insisted that the country’s success in enabling inclusive growth may set a new example for the entire globe.

“I ask you to carry on with your discussions while keeping in mind that what we are doing is not an attempt to seek a special way to develop that’s far different from what all the others are considering, but one that the entire world is considering,” Moon said. “Also, I ask you to keep in mind that should we succeed, it may become a new example, a model that can be presented before the entire globe.”