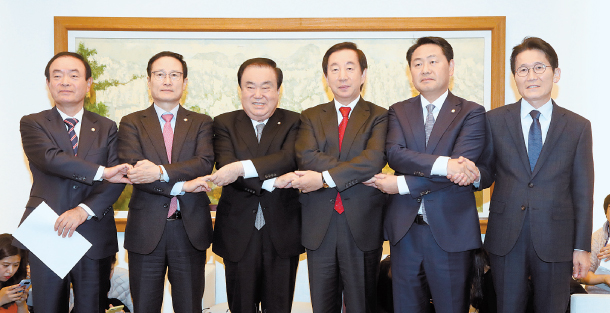 The floor leaders of the five major parties and the National Assembly speaker pose for a photo after reaching an agreement to end gridlock on Wednesday. From left to right: Chang Byoung-wan of the Party for Democracy and Peace; Hong Young-pyo of the Democratic Party; Moon Hee-sang, National Assembly speaker; Kim Sung-tae of the Liberty Korea Party; Kim Kwan-young of the Bareunmirae Party; and Youn So-ha of the Justice Party. [YONHAP]

With only 10 days left to review next year’s budget plan, rival parties finally reached a compromise on Wednesday to resolve political gridlock in the National Assembly.

The floor leaders of the five major parties agreed to launch a parliamentary probe into a hiring scandal at a public subway operator in return for resuming regular discussions over a mountain of tasks on the legislature’s agenda. These include the government’s budget proposal for next year and confirmation hearings for new cabinet appointees.

The compromise, presided over by National Assembly Speaker Moon Hee-sang, comes after three weeks of partisan wrangling and multiple discussions that ended with lawmakers on both sides fuming.

The conservative opposition - the main opposition Liberty Korea Party and minor Bareunmirae Party - had been boycotting regular proceedings in the legislature since the beginning of this month to protest President Moon Jae-in’s appointment of his environment minister without parliamentary approval.

They refused to lift the boycott unless the ruling party accepts a probe into Seoul Metro, a public company under the Seoul Metropolitan Government that is accused of unfairly providing jobs to the family members of current employees.

Pressed by the other four opposition parties and frustrated by the delays, the ruling Democratic Party finally conceded to the investigation, which it had argued was premature. It agreed to launch the probe sometime next month, after the end of the regular plenary session in mid-December. In exchange, the conservative opposition parties withdrew their demand that the president sack Cho Kuk, the senior presidential secretary for civil affairs, for failing to properly vet the environment minister.

The agreement will also allow the National Assembly to begin reviews of key proposals on its agenda, such as bills outlining reforms to privately owned preschools and the formation of a regular consultative body to smooth discussions between parties and the government. Both of these issues, as well as a bill strengthening punishment for drunk drivers, will be reviewed within the regular plenary session this month. More importantly, the government’s 470.5 trillion won ($417.7 billion) budget proposal can be reviewed before the legal deadline for the budget bill expires on Dec. 2.