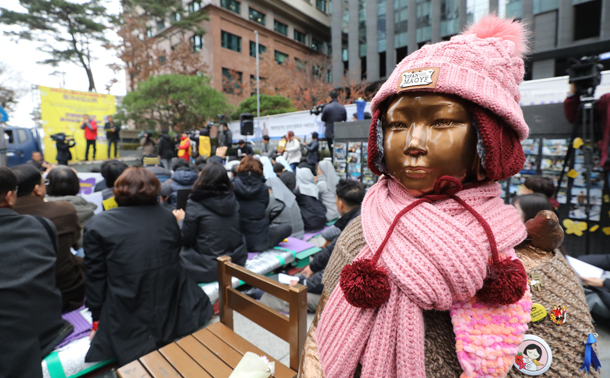 A weekly rally is held in front of the former Japanese Embassy in central Seoul Wednesday protesting the so-called comfort women agreement of 2015, which created a Tokyo-funded foundation South Korea says it will shut down. A bronze statue representing victims of Japan's wartime sexual slavery is dressed in a hat and scarf. [NEWS1]

Seoul announced Wednesday it would shut down a Japanese-funded foundation meant to support women forced to work as sex slaves in Japan’s military brothels during World War II, the latest step to effectively void a 2015 bilateral agreement that was supposed to solve the enduring comfort women issue.

South Korea’s Ministry of Gender Equality and Family said in a press release that it would undergo legal procedures to scrap the Reconciliation and Healing Foundation, which was launched in July 2016 to manage a multimillion dollar fund from the Japanese government.

The fund was based on an agreement signed by both countries on Dec. 28, 2015, between Japan’s current Shinzo Abe administration and South Korea’s former right-leaning Park Geun-hye administration. Aimed at resolving the issue of Japan’s recruitment of Korean sex slaves in the early 20th century, which has poisoned bilateral relations for decades, the deal included an apology from Tokyo and a 1 billion yen fund for the victims, which amounted to about $8.8 million at the time. Both countries said the agreement was “final and irreversible,” and Seoul promised not to criticize Tokyo over the issue again.

But some survivors, euphemistically called “comfort women,” and local progressive civic groups supporting them immediately rejected the deal, saying Japan failed to take real responsibility for its actions and pay legal damages to the victims.

Korean President Moon Jae-in, a former human rights lawyer who entered the Blue House in May 2017 through a snap election after Park was impeached on a slew of corruption charges, criticized the comfort women deal on multiple occasions, drawing ire from Abe, who urged Moon to respect the mutual agreement.

Seoul stressed Wednesday that the foundation’s dissolution did not mean it was walking away entirely from the 2015 comfort women deal. Apparently not to provoke Tokyo, the South Korean government announced its latest decision through a press release instead of having a high-level official speak in front of cameras. On why the foundation was being dissolved, the Gender Equality and Family Ministry only explained that local authorities took into consideration “the current situation surrounding the foundation” as well as “the results of reviews held thus far.”

Abe was quoted by Japanese media as warning that Seoul would be putting bilateral ties at risk. “I would like to ask South Korea to behave in a responsible manner,” he said, according to Kyodo News. Japanese Foreign Minister Taro Kono said Seoul’s announcement was “problematic” for the 2015 comfort women deal and “totally unacceptable.”

Kim Bok-dong, a former comfort woman, welcomed Seoul’s decision but said it was “regretful” it took so long and urged the Japanese government to apologize and provide legal reparations.
The Reconciliation and Healing Foundation was supposed to offer 100 million won ($88,480) to every surviving victim and 20 million won to the victims’ families in case they died. Tens of thousands of Korean women were believed to have worked as sex slaves during Japanese colonial rule of the Korean Peninsula from 1910 to 1945, but only 239 South Koreans have come forward since the 1990s to tell local authorities of their dark past, and only 27 are alive today.

Among 46 survivors who were alive when the 2015 deal was struck, 37 received support from the foundation, and so did some families of victims who died. Of the $8.8 million Tokyo paid to the foundation, around $5.1 million is left today, but the Moon government reimbursed the foundation for previous payments this year, partially through a $9.1 million fund that has been set aside for comfort women victims.

The Gender Equality and Family Ministry said it won’t return the cash to Tokyo but come up with a “reasonable way to dispose it” after discussions with victims and local civic groups. Seoul’s Foreign Ministry will separately take “diplomatic measures” with the Japanese government, the Gender Ministry said.

South Korea’s move to scrap the foundation is expected to drive another wedge in bilateral ties with Tokyo, only three weeks after the country’s Supreme Court ordered a Japanese steel company to pay compensation to four Koreans forced into labor during Japan’s colonial rule. Tokyo immediately rejected that ruling.