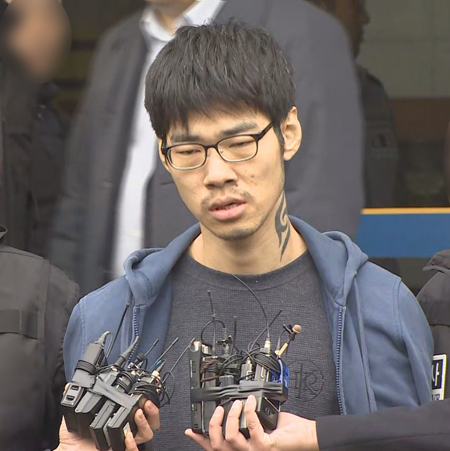 Police recommended a murder indictment for the suspect in a brutal killing at an internet cafe last month after they concluded their investigation into the case on Wednesday.

Kim Seong-su, the 29-year-old suspect, allegedly stabbed a part-time worker at a PC bang (internet cafe) in Gangseo District with a knife dozens of times after a verbal dispute over trash. The 21-year-old worker, identified only by his surname Shin, bled to death from wounds that a doctor at the scene described as “so deep they looked unrealistic.”

A haggard Kim told his side of the story for the first time Wednesday morning in front of the Seoul Gangseo Police Precinct in western Seoul.

“When I asked [Shin] to call his manager, he swore at me and told me to call him myself. Shin said that his father was a policeman and that nothing would happen to him unless I killed him,” Kim said. “At that moment, I was frustrated that I would be treated like this forever. This cleared my mind of any fear and hesitation. I decided to then kill him myself.”

When asked about his younger brother, who was seen grabbing Shin’s arm in the surveillance footage of the murder, Kim said he was not aware of his involvement at the time. However, he said that his brother should be punished as well if he committed a crime.

He then apologized to the victim and his family before officers took him into a police vehicle.

After asking the prosecution to charge Kim with murder, police reiterated their earlier stance that his younger brother was not an accomplice in the murder. They asked the prosecution, however, to charge the brother with battery.

The younger Kim had helped his brother assault the victim, as he did not try to stop his brother as the latter repeatedly beat Shin before the stabbing, police said.

Police said the footage demonstrated that the younger brother, however, tried to stop Kim after he pulled out the murder weapon and began to stab Shin, which is why they did not ask for a murder charge.

The victim’s family was disappointed with the police’s conclusion, their lawyer told reporters, as they had been arguing that Kim’s brother was instrumental in helping Kim murder the victim, who was taller and larger than Kim. They said the fact that most of the injuries inflicted on Shin were located on his neck and face prove that Kim’s younger brother held him down while Kim Seong-su stabbed the victim.

But the issue of Kim Seong-su’s mental state, which spurred immense public controversy, appears to have subsided. The Ministry of Justice also announced the results of a month-long mental examination into Kim last Thursday. Many members of the public were concerned that Kim would not be properly punished for his crimes, as local courts tend to be lenient on offenders that can prove they are mentally ill. A series of tests by mental health experts determined that Kim was not mentally ill or in a state that forced him to act impulsively, a ministry spokesman said.