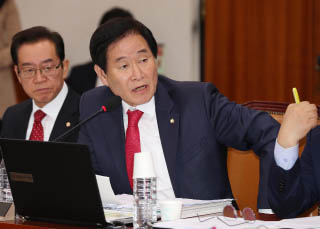 Certain things cannot go together. In math, they are called “exclusive events.” Reduction of fine dust in the air and the phase-out of nuclear power are in such a relationship. While they are both presidential campaign promises, reality prevents them from happening together. The president pledged to reduce fine dust by 30 percent and also promised an end to nuclear power A year and half into the administration, the two commitments have turned out to be exclusive events.
Why is that? The nuclear phase-out has helped to increase coal thermal-power generation. As nuclear power generation decreased to 26.8 percent this year from 30 percent last year, coal thermal-power generation increased from 38.7 percent to 41.9 percent. When electricity is short, you operate power plants using the cheapest fuel.
At the same time, thermal power produces the most greenhouse gases and fine dust to produce a given amount of electricity. Coal thermal-power generation is the third largest contributor of fine dust, accounting for 15 percent of the total. Without reducing coal thermal-power generation, the fine dust issue cannot be resolved. Therefore, the nuclear phase-out needs abandoned or modified.
It will not be easy to replace nuclear power with renewable energy. The capacity is insufficient and the source is too unstable to be used for base-load production. Plus, if liquefied natural gas (LNG) power generation increases, electricity rates would go up. The people would simply not accept that. The fine-dust reduction campaign and the nuclear power phase-out are mutually exclusive. Which one to abandon?
Of course, it is nuclear phaseout. First, people are more afraid of fine dust (82.5 percent) than nuclear radiation (54.9 percent). Damage of fine dust is also greater and wider. Not many people support the nuclear phase-out. Two surveys conducted by the Korean Nuclear Society show that seven in 10 respondents (67.9 percent) want to maintain and expand nuclear power generation. Only 28.5 percent wanted reduction of nuclear power generation and the phase-out of the plants.
There are merits to giving up on the nuclear phase-out. It will bring quality jobs, enhance industrial competitiveness and help the development of future industries. There may be smaller pluses as well. If the administration gives up the nuclear phase-out policy, it can carry on the “green growth” policies of the Lee Myung-bak administration.
Green growth fits perfectly with the environmental ideology of the Moon administration. Lee announced the first plan to drastically increase nuclear power (15.9 percent to 27.8 percent) and renewable energy (2 percent→to 11 percent) while reducing coal thermal power (24.3 percent→ to 15.7 percent) by 2030. The decision was reached despite crony opposition. The Moon administration’s 2030 renewable energy plan is similar in general. The only difference is that it opts for a nuclear phase-out rather than a coal phase-out.
President Moon must make a bold decision. There are some signs he already has. On Nov. 20, he said that he supports green growth at the P4G summit in Copenhagen. The Blue House explained that the administration wishes to continue good policies regardless of their origins. But those in the field are curious if what he said was simply diplomatic rhetoric. If the government gives up the nuclear phase-out, doubts will be cleared.
Meanwhile, the nuclear phase-out offers only losses: jobs will be lost, China’s renewable energy companies will benefit from taxpayer money and Korea will continue to live with fine dust. Moon shared a book on Nov. 19 and discussed communication and empathy. It is unclear what empathy and communication he was referring to. Since Dr. Jeong Hye-shin, author of the book, set up a psychological therapy center for the fired workers, it is likely that Moon was talking about labor issues. I hope he was also talking about the nuclear phase-out and fine dust.
JoongAng Ilbo, Nov. 22, Page 34