SK Wyverns manager looks back at a successful KBO run

SK Wyverns manager looks back at a successful KBO run 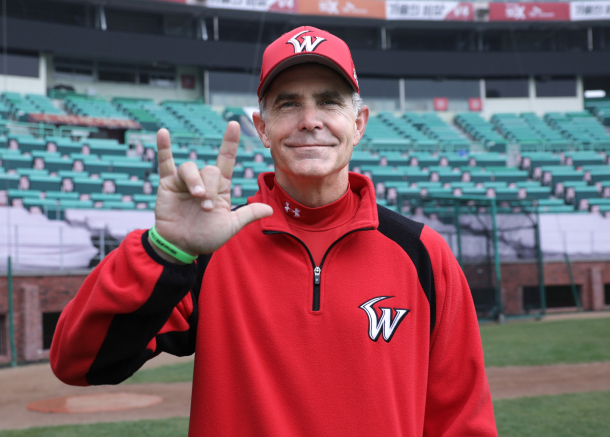 Trey Hillman, the recently-departed manager of the SK Wyverns, delivered a hard-earned championship title for the first time in eight years for the Incheon-based team. SK fans already miss him, and not just because of his performance. Hillman gained their respect for the humility with which he worked during his two-year stint with the Wyverns.
The former Los Angeles Dodgers bench coach had to leave behind SK fans to support his family in the United States. He said that God’s teaching and words always took center stage during his time here.
The JoongAng Sunday sat down with Hillman on Nov. 7 before a game with the Doosan Bears at Munhak Baseball Stadium in Incheon to discuss the next step in his career, faith and what he learned as SK manager.

Q. Fans are saddened by the fact that you have to leave. But you clearly made a point that your priorities are God, family and work. Is that correct?
A. Yes, that is correct. I always try to talk about that with humility, because I am as imperfect as any human being. In my Christian faith, I just keep trying to get better and keep those priorities. But sometimes, I get confused and work too much. Sometimes, I neglect the things that I should prioritize better. So I try to keep my priorities when it comes down to taking care of my family. I do feel big responsibility to try to love my dad and my stepmom as much as I can. Being back in the United States will allow me to support them.

Have you received any MLB offers?
I don’t have anything finalized officially. I hope by the end of this month there are still MLB positions available. I do have a lot of contacts and I have an idea of some of the areas with different teams. I hope to have something finalized by the end of the month, because I do need to still work. But nothing official, and it will be ongoing probably until the end of the year after I get back to the United States. I will look at the situation in the same way as I did when coming over here. I wasn’t planning on managing again before I came to SK. I had a very good job with the Houston [Astros] and a very good contract. But I felt that God was leading us to come to South Korea.

You said God put you here and you moved with faith. But is there any moment that your Christian faith collided with the nature of sports — competition, winning and losing?
I think it is something that God continues to teach me more and more about. I try to keep things simple. In any sports or for any coach, a more important thing in life is to keep your balance especially mentally with your priorities. It can cause conflict sometimes. Then I ask myself a couple of questions. That is: Am I serving? Because that is what Jesus did. Am I loving? And as a coach, am I teaching? Am I providing a good foundation and helping them in their personal lives?
As a coach, I try not to pray for wins, but I do pray for God’s favor. I am thankful that I like to compete and thank God wired me that way. I am thankful that I love to win and don’t like to lose. I am thankful for the qualities that God blessed me with. I just pray that whatever I do, whatever I say, it glorifies God. More often, I let him down. But I just pray that I glorify him more than letting him down.

In the summer time, you participated in a charity event for children with cancer and you donated your hair for them. What does this event mean to you?
I started thinking about donating my hair last year in the mid-season. I mentioned the idea to our public relations and promotions department. To try to make a bigger impact, my wife and I visited a hospital early in the season. I didn’t mind cutting my hair because it is not a big deal.

What if an opposing player throws a pitch at your player’s head? Do you think your team should forgive or hit the player back?
It depends on the specific situation. In most situations, the normal human reaction is that they always think that they did it on purpose. If they did do it on purpose, you have to protect your own players. If the umpire is not going to warn them, you have to send messages back, some times. It is a very difficult decision as a manager. I am going to protect them as much as I can.

Was there any specific verse that you kept in your heart during challenging games like against the Nexen Heroes in Game 5 of the previous playoff series?
I carry a bible verse in my pocket, and it’s Isaiah 40:31 throughout the series. I read that a lot to stay calm. I still had faith that we will figure out a way to get the job done when they tied up. I still believed that we had a chance even after they scored. For me, the way I interpret the verse (“But they that wait upon the Lord shall renew their strength; they shall mount up with wings as eagles; they shall run, and not be weary; and they shall walk, and not faint”) is that it is all about trusting and known that God will be there when you need him. If you have the faith, he will strengthen you.

In the past two years, you really set the SK Wyverns forward as a home-run team. How did you do it?
I really didn’t do anything, to be honest with you. Han Dong-min was getting back from his military service. That was a really good addition to the team. Jamie Romak and Choi Jung, they continued development. So it was really not anything that I have done, other than just providing the opportunity.

You have experience in Japan, the United States and Korea. If there is something that stands out just in the KBO compared to the other two, what could that be?
I think that the congruity in our team is as good as any culture that I have ever experienced. And that is really something that is comforting to the manager, because you want these guys support each other with all different types of personalities. This particular team desired to win and desired to be successful. There was a hunger to be successful. That was pretty cool, too.