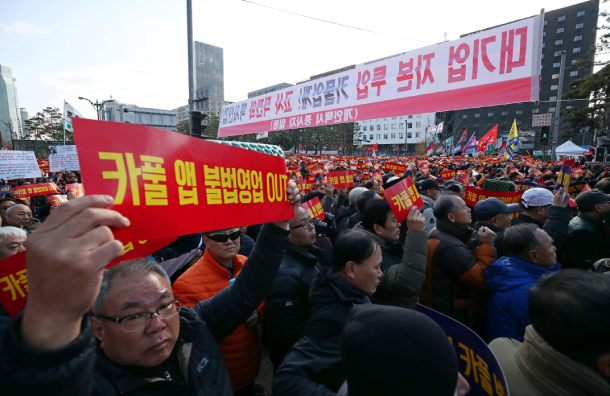 Taxi drivers on Thursday stage a protest outside the National Assembly in western Seoul in opposition to Kakao’s move to introduce a carpooling service. [YONHAP]

The drivers are demanding legislators make the proposed business illegal, claiming that the service will threaten their livelihoods.

The collective move came after a 24-hour strike on Oct. 18. The strike itself was called two days after Kakao made public on Oct. 16 its plans to introduce the Kakao T carpooling service and began recruiting drivers.

Kakao has not been dissuaded. After the strike, it released an app for carpooling drivers and added a tab for the carpooling service to its existing Kakao T taxi app.

Kakao initially set the end of the year as the target for the release of its service.

“The carpooling service, by turning drivers into platform laborers, is just a means to exploit them and bloat the belly of a large company,” said a statement from an emergency committee established by four taxi interest groups. They insisted that, during the upcoming regular session of the National Assembly, legislators should review and pass an amendment to make the carpooling app service illegal.

On the same day, digital mobility companies and start-ups issued a statement saying taxi drivers should cooperate with tech firms for the sake of co-existence and innovation.

“Digital mobility companies sympathize with the anxiety felt in the industry and are ready to discuss mutual growth at any time,” the Smart Mobility Forum and the Korea Startup Forum said in a joint statement.

Companies developing mobility businesses, such as Kakao and Socar, have been asking taxi drivers to sit for talks, but taxi drivers have been refusing to meet, even boycotting a session arranged by the Presidential Fourth Industrial Revolution Committee.

The mobility company statement also said that, even though mobility start-ups worldwide have grown into unicorns, the services are considered illegal in Korea, leaving relevant start-ups in the country in limbo.

Korean companies are thus doomed to fall behind and foreign companies will quickly dominate the local market, it argued.