Foal Eagle is being scaled back

Foal Eagle is being scaled back 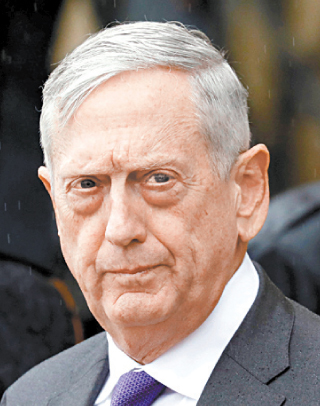 Mattis told reporters at the Pentagon in Washington, “Foal Eagle is being reorganized a bit to keep it at a level that will not be harmful to diplomacy.”

South Korea and the United States have suspended several major joint exercises this year following the June 12 North Korea-U.S. summit, including the Ulchi-Freedom Guardian drills, which would have happened in August.

Vigilant Ace, a massive joint aerial exercise scheduled for December, was also suspended last month after a meeting between South Korean Defense Minister Jeong Kyeong-doo and Mattis. The United States and South Korea agreed to conduct a review by Nov. 15 and reach a decision on plans for large-scale military exercises next year by Dec. 1.

“We have taken a decision,” Mattis said Wednesday. “We are not canceling exercises. We are realigning one exercise.” He did not elaborate further.

The Pentagon chief’s remarks come as North Korea and the United States are trying to reschedule high-level talks canceled abruptly earlier this month, which could pave the way for a potential second summit between the two countries’ leaders.

In a press conference following his June 12 summit with North Korean leader Kim Jong-un in Singapore, U.S. President Donald Trump pledged that he would end “war games” in South Korea as long as progress was seen in denuclearization talks between Washington and Pyongyang. He specifically called the deployment of strategic bombers to Korea for such military exercises - often from a base in Guam - as “provocative” and “expensive.”

The Foal Eagle and Key Resolve exercises were postponed by Seoul and Washington at the beginning of this year to reduce tensions with Pyongyang during the PyeongChang Winter Olympics and Paralympics hosted by South Korea in February and March. North Korea’s participation in the Winter Games and refrainment from any nuclear and ballistic missile tests led to a period of detente on the Korean Peninsula with a series of inter-Korean summits and the first North-U.S. summit.

Foal Eagle eventually took place in the beginning of April, involving some 11,500 U.S. troops and nearly 300,000 South Korean soldiers, but ran only four weeks, scaled down from eight weeks in 2017. Key Resolve was held for two weeks from April 23, a similar duration to last year when it ran from March 13 to 24.

There are around 28,500 U.S. troops stationed in South Korea.

The North sees the South-U.S. drills as a rehearsal for an invasion and they often lead to exacerbated tensions on the Korean Peninsula.

Mattis implied that the drills, however, are not being canceled but scaled back in scope.

Washington will “continue to look at multiple aspects of future exercises to include their size and scope,” said Lt. Col. Chris Logan, a Pentagon spokesman, in a statement.

He added that Jeong and Mattis agreed last month that “it was important for military activities, including exercises, to be conducted in a manner that complements diplomatic efforts to achieve North Korea’s denuclearization while sustaining readiness of U.S. and [South Korean] military forces.”

The South Korean Ministry of National Defense didn’t clarify the manner in which the Foal Eagle exercise will be scaled back, saying that a “review” of the combined exercises continue to take place.

“South Korea and U.S. defense authorities are closely consulting with each other on military efforts to back our two governments’ diplomatic efforts toward North Korea’s denuclearization,” said Choi Hyun-soo, a spokesperson for the Defense Ministry, in a press briefing in Seoul Thursday.

“Taking into consideration security issues, South Korea and the United States are reviewing the holding of joint drills and exercises for next year, and Secretary Mattis’s remarks are understood to be an extension of this.”

It is unclear if this includes a reduction or canceling of the deployment of U.S. strategic assets like its aircraft carriers and B-1 and B-52 bombers, which Pyongyang has been especially sensitive to.

A reduction of the combined exercises with Seoul could be a gesture to induce Pyongyang toward denuclearization talks. But it could also be a double-edged sword.

During his Senate hearing to be confirmed as commander of the U.S. Forces in Korea in September, Gen. Robert Abrams said that not conducting the Ulchi-Freedom Guardian exercise led to a “slight degradation” in the ability “to maintain continuity and to continue to practice our interoperability.”

But Abrams also said that canceling the exercise was a “prudent risk” in the effort to deal with North Korea.

Nonetheless, South Korean defense officials have indicated that the military is always prepared for various scenarios on the holding of joint exercises, in coordination with the Pentagon.

U.S. Secretary of State Mike Pompeo told the Kansas-based radio station KQAM Wednesday that North Korean leader Kim Jong-un “continues to make the commitment to allowing verification of the denuclearization of his country.”

He added, “We, in turn, have continued to make the commitment that we will provide a better future for the people of North Korea” and that “the world will join together and allow a brighter future for that country and its people.”

Pompeo said that “there’s no time frame” on the denuclearization negotiations, adding, “We don’t want to set a date certain.”

White House officials have indicated that they would like to see North Korea denuclearize by the end of Trump’s first term as president, which would be January 2021, but Pompeo’s remarks suggest patience with Pyongyang.

“There is an understanding about how it is we hope that we can proceed,” he said, “but that framework is still being built out and discussions continue.”

Pompeo’s remarks come a day after he said in a press conference that “peace on the peninsula and the denuclearization of North Korea aren’t lagging behind the increase in the amount of inter-relationship between the two Koreas.”