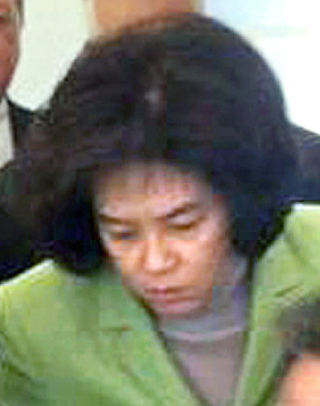 Former North Korean leader Kim Jong-il’s secretary Kim Ok, once rumored to be the late ruler’s secret fourth wife, appears to have been sent to a prison camp, a local government official exclusively told the JoongAng Ilbo on Wednesday.

South Korean intelligence authorities concluded that Kim Ok was imprisoned after Kim Jong-il died in December 2011, according to the source, who requested anonymity. Kim Ok appears to have been sent to a prison camp for political criminals in 2014 for her links to Jang Song-thaek, the uncle of current North Korean leader Kim Jong-un. Jang was once considered the second most powerful man in the regime.

Jang was executed on Dec. 12, 2013, nearly two years after Kim Jong-un took power following his father’s death. At the time, Jang served as vice chairman of the Workers’ Party’s Central Military Commission and chief of the Central Administrative Department. He was apprehended in November 2013 along with his close aides, kicked out of the party and tried in a special military tribunal. He was found guilty of “anti-party, counter-revolutionary factional acts in a bid to overthrow the leadership of the party and state and the socialist system,” in the words of North Korea’s official media.

Kim Ok is still alive, the South Korean government official said. Her close family members were all imprisoned as well, according to the source, but it is not known whether they’re still alive.

Kim Ok, who is 53, was seen shadowing Kim Jong-il inside and outside North Korea wherever he went. This caused local analysts to believe she was the late leader’s fourth wife, though North Korean media identified her as his secretary. She was so close to Kim Jong-il that when he visited China in May 2011, she sat next to him in his private vehicle.

Kim Ok’s family was close to Jang’s. Kim Ok’s younger sister, Kim Ok-kyong, was the roommate of Jang’s only daughter, Jang Kum-song, when the younger Jang was studying in France in the mid-2000s. After Jang was executed in December 2013, North Korean authorities tried to wipe out any trace of him, and Kim Ok’s family was apparently targeted.

Another South Korean government official said Kim Ok and her family thrived until Kim Jong-il died, and that Jang had played a significant role in their ascent. This backfired in the Kim Jong-un era, when Jang was accused of plotting to overthrow the government. Kim Jong-un probably did not execute Kim Ok because she was close to his father and looked after him during his rule, according to Jung Chang-hyun, a North Korea expert who heads a modern history research institute.