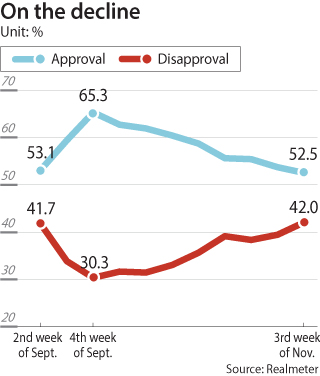 President Moon Jae-in’s approval rating dropped to 52.5 percent, the lowest level since taking power in May 2017, affected by a stagnating economy with no signs of an immediate rebound and stalled talks on North Korea’s denuclearization.

In a poll by Realmeter of 1,505 adults nationwide from Monday through Wednesday, Moon’s popularity dropped 1.2 percent points to 52.5 percent in an eighth straight week of declines. The previous lowest point was 53.1 percent polled in the second week of September, right before his third summit with North Korean leader Kim Jong-un in Pyongyang.

Approval hovering just above the 50 percent mark is a stark contrast to earlier this year when they surged to around 80 percent on hopes for a breakthrough with North Korea, which contributed to a sweeping victory in local elections in June.

Over a period of two months, Moon saw his approvals drop 12.8 percentage points from 65.3 percent in the fourth week of September to this week’s 52.5 percent.

Asked about the poll results, Kim Eui-kyeom, spokesman for the Blue House, said he had “no comment.”

“The decline appears to have been affected by an ongoing controversy over Kim, on top of worsening economic statistics and people’s livelihood conditions, which have led swing supporters, those who are moderates and conservatives, to develop a sense of mistrust for the ruling Democratic Party and the liberal administration,” assessed the pollster.

Such a big decline underscores the fact that Moon’s popularity is vulnerable in the Gyeongsang regions, known as a stronghold for conservatives, and that his support could slip away fast if economic conditions fail to improve.

But Moon’s popularity in Jeolla rose, a testament to the region’s loyalty to the liberals. In Gwangju and the two Jeolla Provinces, Moon’s approval increased 2.8 percentage points to go from 72.1 percent a week earlier to 74.9 percent.

The poll indicated that Moon was negatively affected by a nationwide general strike carried out by the Korean Confederation of Trade Unions (KCTU) on Wednesday to protest labor policies of the administration, mobilizing nearly 160,000 union members. One major policy disagreement between the umbrella union group and the government is so-called flextime, which allows companies to vary maximum working hours depending on the work needed at a given time for six-month periods, rather than the current three months. For example, a company that makes air conditioner parts could increase its working hours to more than 52 hours a week during the high-demand summer season and then correspondingly decrease them during the winter season.

The latest poll showed that, despite the KCTU’s strong objection to that policy, 50.4 percent of respondents supported the flexible working hours system while 30.9 percent opposed it.

By age groups, Moon’s approvals among people in their 30s showed the largest decline, 6.6 percentage points, from 63.5 percent to 56.9 percent. That group has been hit hardest by a stagnant economy that critics blame on a hike in the minimum wage by more than 16 percent to 7,530 won ($6.66) per hour at the start of this year. It was the steepest rise in nearly two decades. The minimum wage is set to grow 10.9 percent on year to 8,350 won at the start of next year.

Last month, the number of people in basic jobs, such as construction and delivery work, totaled 3.56 million, 93,000 fewer than in the same month a year ago, according to Statistics Korea - the biggest drop since the government began collecting data in its current form in 2013.

The continuing decline in Moon’s approval underscores the importance of the economy for the president when other external factors, namely inter-Korean relations and the North-U.S. talks, are on hold.