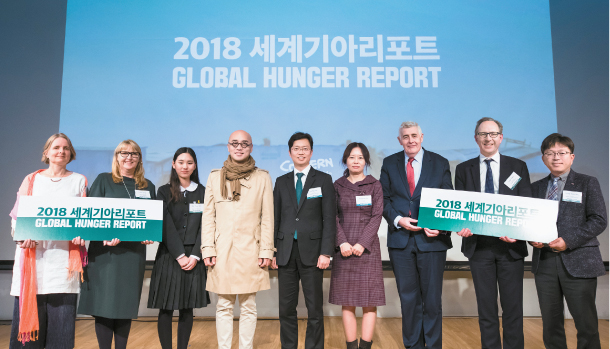 Storytellers in the media hold the key to bridging the gap between locals and asylum seekers, according to members of Concern Worldwide, an Ireland-based humanitarian aid agency, at a conference in Seoul Tuesday.

“We have horrific images [on starvation] coming out in Yemen,” said Dominic MacSorley, CEO of Concern Worldwide, at the 2018 Global Hunger Report conference hosted by the organization at KT Square in central Seoul. “Sudan experienced the first famine in years - unfortunately, it didn’t stay in the headlines for long.

“When famine is declared, it should be big news,” he said. “But unlike genocide, there is no formal trigger that requires a formal response. But famine should, at the minimum, demand public attention. Yet a day after the famine in Sudan was declared, the biggest news on CNN was Donald Trump’s tweet about [fake information regarding] Sweden.”

Some local reporters said they have a hard time covering the refugee issue because of a gap of understanding between the locals and refugees fleeing conflict and hunger.

“I’ve been to refugee camps to report on what’s happening there,” said Kim Young-me, a reporter of Sisain, a local media outlet, at the conference on Tuesday. “The hardest part on reporting on their lives there is the gap between what some Koreans may think about the refugee life and actual refugee life. I think a lot about how I can best tell a story on the issue so that it is relatable to Koreans.”

Kim told a story about how she provided shelter to a family of asylum seekers from Somalia, which she said was the first time she witnessed starvation up close.

“They were a family of a mother and three children, and I met them at the border between Somalia and Kenya,” Kim said. “Because they couldn’t register at the refugee camp there, which was packed full, I let them stay with me for a bit. The little ones had starved for five days and their eyes were out of focus.

“The mother told me that she had started the journey with five children, but two of them starved to death on the way,” Kim said. “She said it with so little emotion, I believed that maybe she’s not so sad about the losses.”

But the family changed after they shared some bowls of cereal at Kim’s place, she said.

“The little ones’ eyes were back in focus, and in a few hours they started joking and playing among themselves,” Kim said. “The mother, an hour after she had something to eat, started crawling on all fours and bawling, calling out her lost children’s names.

“That’s when I saw what starvation can do to you,” she said. “It wipes out emotions.”

“Some would comment on my article, ‘If you love refugees so much, why don’t you go feed them all,’” Kim said. “A lot of the hostility towards asylum seekers comes from not being able to understand what it is really like for them. This is what we need to understand about Yemenis in Korea - they do not want to stay and become Koreans, they want to go back to their country. Our role is to provide them with protection until then.”

The Yemeni refugee issue first came to public attention in Korea when more than 500 refugees entered the country through Jeju Island between January and May of this year. Many of them allegedly found the island after word got out that they could land on Jeju Island without a visa and find jobs. Jeju adopted a visa-free program in 2002 to boost tourism on the resort island.

On June 1, the Korean government added Yemen to a list of countries whose citizens are required to have visas to enter Jeju.

A total of 484 Yemenis ended up applying for asylum on the island this year, and around 360 have been granted a stay in the country for up to a year for humanitarian reasons. None of them received the refugee status they requested. More than 700,000 people signed a petition to the Blue House in July asking it to scrap the refugee law and stop accepting asylum seekers.

Humanitarian aid experts said the social divide on the acceptance of refugees is not unique to Korea.

“I think it is normal for people to feel uncomfortable if a group is very different from them,” said Jane Williamson, a protection officer at the UN High Commissioner for Refugees’ Korea office. “Some people tell me they’re ashamed that Koreans are being unfriendly to refugees, but there are other cases in the world where [locals in] countries are hostile to refugees. But once people meet the refugees and hear their stories they will understand and have sympathy.”

The participants at the conference said humanitarian aid, while necessary, is not the ultimate solution to the root causes of refugee crises.

“Antonio Guterres asked for a surge of diplomacy,” said MacSorley. “Militarization does not end wars. It will only end through political solutions … and what has been in progress lately is putting women at the center of peace negotiations. We need more women at the center and leading, not on the sidelines.”

The event on Tuesday was the 13th time that Concern Worldwide hosted the Global Hunger Report in Seoul. The organization, which is the largest humanitarian aid agency in Ireland, said that while the worldwide population suffering from hunger and malnutrition fell by 28 percent from 2000, around 50 countries will not be able reach “low hunger” levels by 2030.

Concern Worldwide’s Global Hunger Index categorizes the hunger level of each country into five stages, from extremely alarming to low. It has a separate category for countries with insufficient data but suspected of having a significant hunger rate. The levels are calculated based on the population’s rate of undernourishment, stunted growth and the child mortality rate.

Central African Republic was calculated to have an extremely alarming hunger rate, and other countries in Africa and the Middle East, like Yemen, Chad, Zambia and Sierra Leone were said to have alarming rates of hunger.

The index indicated that there was insufficient data regarding other countries in the region, including the Democratic Republic of Congo, South Sudan, Somalia, Libya and Syria, but that they were also suspected of having high levels of hunger.

“This is the 20th city where we have launched the Global Hunger Index, but the one here in Seoul is always very special because Ireland and Korea know famine,” said MacSorley. “Our stories of recovery are very different - ours took generations, but the Korean story of recovery happened a lot faster.”

“Twenty percent of what we spend on aid is devoted to hunger, and we aim to double that in absolute terms by 2020,” said Irish Ambassador to Korea Julian Clare. “Irish Aid and Concern Worldwide work together - Ireland spends the largest proportion [on fighting hunger and starvation] among developed countries in the [Organization for Economic Cooperation and Development] OECD. Our aim is to reach the poorest of the poor and reach them first.”