After bumpy start, the Hi-Pass try to get back on track

After bumpy start, the Hi-Pass try to get back on track 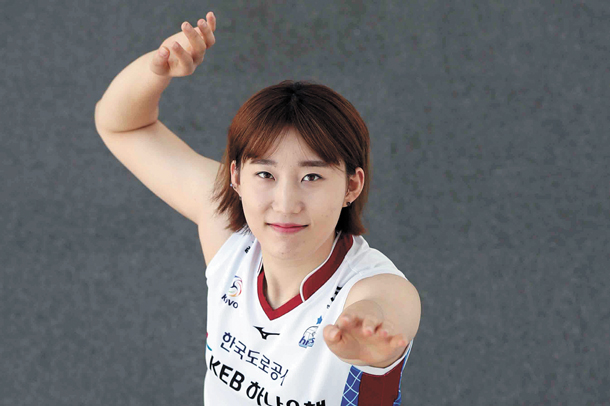 Before the volleyball season began, Korea Expressway Corporation Hi-Pass was considered the most likely team to sweep the regular season and the playoff title. 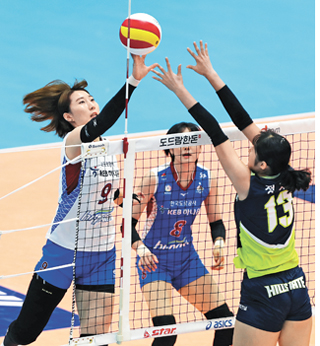 Park Jeong-ah of Korea Expressway Corporation Hi-Pass, left, spikes the ball during a match against the Hyundai E&C Hillstate at Suwon Gymnasium in Gyeonggi on Nov. 10. [NEWS1]

One month later, the results are telling a different story. The Hi-Pass are far from the dominant team that everybody expected, ranking fourth out of six teams in the league after Ivana Nesovic unexpectedly left at the beginning of the season due to a shoulder injury.

After Nesovic’s injury, outside hitter Park Jeong-ah has been leading the team’s offense.

During the Hi-Pass’ match against Korea Ginseng Corporation Pro Volleyball Club on Nov. 7, Park led the team to a 3-2 come-from-behind victory. It wasn’t the team’s victory, but Park’s tears during the match that made headlines the next day.

Park doesn’t exactly have a reputation for wearing her heart on her sleeve. Considering that she didn’t shed a tear after winning MVP last season, fans were surprised to see her cry during the match on Nov. 7.

“I didn’t cry because I was tired,” Park said. “I cried because I felt like we could win but we weren’t playing as I wanted to. Ivana, setter Lee Hyo-hee and our center Bae Yoo-na were all sick so I had to lead the team, but I couldn’t.”

Park ultimately led her team to that victory, scoring 36 points, more than anyone else in that game.

“When I played for the IBK Altos, we didn’t really lose that many matches so I didn’t really know,” Park said. “I guess I am a very competitive player. I started to think a lot about what our team needs to do to start winning.”

As Nesovic ended up getting released by the Hi-Pass shortly after the match, Park was given greater responsibility to lead the team. But instead of suffering from the pressure, Park is playing at her best, ranking second in the league for scoring at 226 points.

After replacing Nesovic with Fatou Diouck, the Hi-Pass is slowly making its way up the leaderboard. With five wins and four losses, totaling 14 points, Hi-Pass is only one point behind the third-ranked Heungkuk Life Insurance Pink Spiders and only three points behind the leader GS Caltex Seoul Kixx.

“Thanks to Fatou, I feel a lot more comfortable,” Park said. “Last season, we also struggled at the start of the season, so we’ll slowly make our way up.”

It’s not only in the Korea Volleyball Federation that Park has been successful. On the national team, Park has become a leading attacker along with Kim Yeon-koung. In the five preliminary games Korea played at the FIVB Volleyball Women’s World Championship, Park led the team by scoring a total of 108 points, 38 points more than Kim. However, Park wasn’t too excited about the compliments she received for her achievement.

“It really doesn’t matter because our team lost,” Park said. “The World Championship was really important for us, so getting eliminated in the first round was a big shock. But at the same time, it was a good experience to play against the world’s best players.”

Although Park was given compliments after the World Championships, playing for the national team has long been a struggle for her.

During the quarterfinals match against the Netherlands at the 2016 Rio Olympics, Park made a number of serve receive errors and fans criticized her as causing the team’s loss. Park’s errors in the quarterfinal were more than enough for the fans to forget about her performance during the preliminary rounds.

After being continuously criticized by fans, Park had to close her social media account. It wasn’t until recently that Park got back online.

“I still don’t really read the comments,” Park said. “The fans kept on asking me to at least post pictures so I started social media, but I don’t know if I should continue because some people still post negative comments. To be honest, I don’t really read articles about me unless my friends send me the link.”

Since Korea needs to improve its world ranking ahead of the 2020 Tokyo Olympics, the players have been given a rough schedule. They were given no break in between the regular season and national team tournaments.

“When we played in Argentina, it took us two days to travel and the next morning, we had to play,” Park said. “It was summer in Korea but winter in Argentina. Their facility was in such poor condition that we were shivering while playing. But that’s also just an excuse. It’s very tiring, but I always feel honored to play for the national team. I want to play better.”

The Hi-Pass will continue its regular season with a match against the Kixx at Gimcheon Indoor Gymnasium in North Gyeongsang at 7 p.m. on Wednesday.