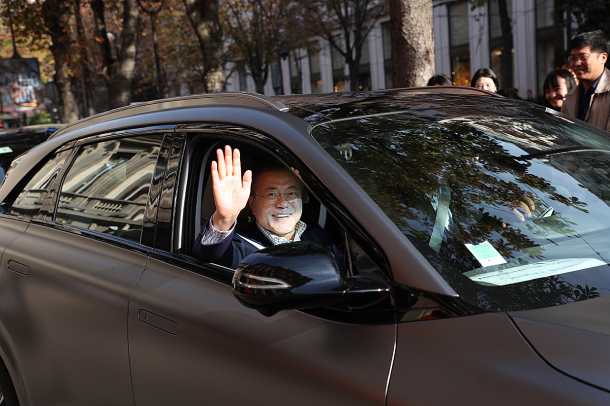 KIM DONG-HO
The author is an editorial writer at the JoongAng Ilbo.

President Moon Jae-in’s ride on a hydrogen-powered fuel-cell electric vehicle (FCEV) during his recent visit to France was a historic moment. The FCEV, which was considered an explosive in Korea because of urban myths, showed off Korea’s latest technology. There are many rumors and myths in Korea. It is not an exaggeration that Korea is a “myth republic.” All major events — from the mad cow disease, the sinking of the Cheonan and Sewol ferry tragedy — are followed by myths and rumors. In retrospect, many were ungrounded or exaggerated.

Meanwhile, FCEVs work completely differently. Hydrogen is combined with oxygen in the air to generate electricity, and as an added perk, fine dust is purified. Also, there is little risk of explosion. Nevertheless, hydrogen tanks are wrapped with special fabric hundreds of times for safety. It is designed so that it will rip and deflate like a soccer ball in case of external shock.

As rumors spread, FCEV charging stations are rare in Korea. The United States, Japan and Europe have more than 100 charging stations, while Korea has only 21. Moreover, it is illegal to install a charging station in the centre of a city. It stands in contrast to Moon’s experience of using hydrogen in the heart of Paris.

The pinnacle of the rumor is that producing FCEVs only benefits conglomerates. This rumor was spread by some politicians as a way to attack Hyundai Motor. As Moon explained in Paris, Hyundai Motor will provide 5,000 FCEVs to France by 2022. Being chosen by France, a developed country in science and technology, shows that Hyundai Motor’s technological level is reliable.

Thanks to Moon’s effort, the scares and rumors about FCEVs were cleared up in Korea. A few days ago, hydrogen buses began operating in Seoul.

How about money? Does only Hyundai Motor make money? In order to produce FCEVs, 300 partner companies needed to provide parts to Hyundai. These companies had invested in facilities to produce FCEV parts in preparation for a “hydrogen society” but were in a danger of going out of business.