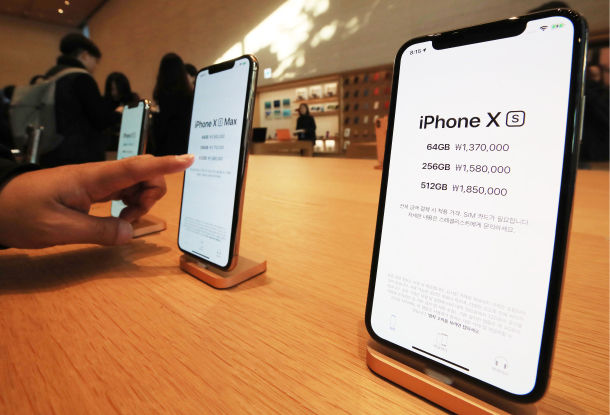 The latest iPhones including XS, XS Max and XR on display at the company’s Apple store in Garosugil in Gangnam, southern Seoul, on Nov. 2. [YONHAP]

Just before the Fair Trade Commission comes to a decision on whether Apple has violated domestic fair trade laws, Korean phone distributors are calling the tech giant out for being the only phone manufacturer in the country that makes them pay for display phones in their stores.

The Fair Trade Commission (FTC) is due to hold a meeting in mid-December after two years of investigating accusations against Apple and finally decide whether the company indulged in unfair practices. Some complaints are that Apple charges mobile carriers for repair and advertising costs of Apple products.

On Wednesday, the Korea Mobile Distributors Association (KMDA) accused the company of doing something that no other handset maker did in Korea. “Apple doesn’t let us sell iPhones at all if we don’t purchase the demo phones needed for store displays,” read a statement from the KMDA. “Other manufacturers provide the display phones themselves, and come to collect them later.”

According to the association, Apple even charged retailers for the costs of building shelves for display models and controlled where the promotional posters for new products were placed. Most of the demo devices are priced at around 70 percent of the market price. Distributors say they also had to purchase demo iPads and Apple Watches.

iPhones are getting more costly, which could be a factor in the distributors going public with complaints against the company. 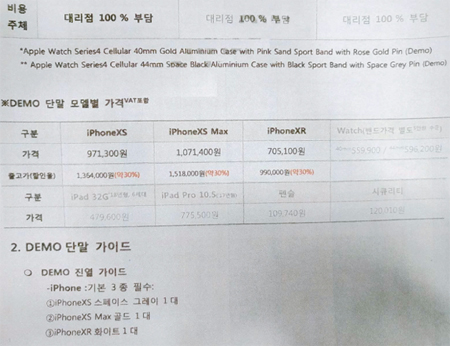 A document by Apple sent to retailers specifically states that they have to purchase demo iPhones. [JOONGANG ILBO]

“Previously, I spent around 1.1 million won on demo devices for Apple’s new products,” said a 53-year-old owner of a wireless store in Jongno District, central Seoul.

Branches of the three major mobile carriers - SKT, LG U+ and KT - are the main distributors of mobile phones in Korea.

“But recently, with Apple products becoming more expensive, the costs I have to bear have risen tremendously,” he said.

According to industry estimates, each mobile retailer spends around 2.9 million won a year purchasing Apple demo phones. This means that Apple will earn around 25.5 billion won in total sales of demo phones from the country’s 8,800 wireless stores.

“We are not trying to sue Apple right away at this point, but rather figure out who holds responsibility,” added a KMDA spokesman. “Mobile carriers may be responsible for allowing Apple to pursue such unfair practices, leaving distributors to pay for the costs.”

Apple has not released an official response to the KMDA’s complaints.

Sales of Apple’s new products have been less than stellar, which is also fueling dissatisfaction among distributors. According to industry estimates, the number of customers buying Apple’s three newest models between Nov. 2 and Nov. 7 was only 60 percent of the number that purchased Apple’s iPhone X and iPhone 8 in their first week last November.