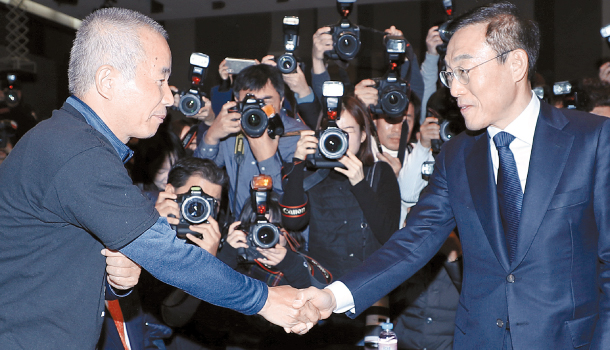 Samsung Electronics issued a full apology Friday to former workers who got sick, even fatally, after working at its factories and their relatives, putting an end to an 11-year dispute that made the public aware of workplace-related illnesses.

“Colleagues and their families have been suffering for a long time,” said Kim Ki-nam, Samsung Electronics’ device solution division chief executive, during a ceremony held Friday in central Seoul. “Yet Samsung Electronics failed to care for them sooner.”

Kim said efforts to truly understand the victims and their families’ suffering were insufficient, admitting that the company didn’t completely eliminate dangers in its semiconductor and liquid-crystal display (LCD) plants early enough.

After bowing to relatives of victims and the press, Kim promised that the company will transform itself into a healthy and safe workplace. In July, Samsung pledged to “unconditionally” accept anything suggested by a third-party arbitration committee that mediated between the company and former employees’ families since 2014. The committee’s arbitration plan was offered to both parties on Nov. 1, and they both agreed to accept it.

Samsung, victim families and the arbitration committee on Friday signed an agreement regarding compensation and future preventative measures.

“To be honest, the Samsung Electronics CEO’s apology is not enough for former workers and their families who suffered from work environment-related diseases (…) especially compared to the pain we’ve gone through over the last 11 years,” said Hwang Sang-ki, head of Banolim, a civic group representing some relatives of former Samsung factory workers.

“But I will accept today’s apology as Samsung’s resolution,” he said. “I’m glad the arbitration plan expanded the range of compensation from what Samsung suggested in the past, to include not only Banolim victims but also those who didn’t contact us.”

The final compensation plan included a larger range of former workers although the amount of compensation was smaller than former plans. As for prevention, Samsung donated 50 billion won to the Korea Occupational Safety & Health Agency, a government body that is supposed to guard the health and safety of local workers.

Hwang expressed regrets about workers who aren’t covered by the plan, either because they were not hired directly by Samsung or suffered from diseases not covered by it.

It was the 2007 death of Hwang Sang-ki’s 23-year-old daughter Hwang Yu-mi that triggered the decade-old dispute. Having worked at a Samsung chip factory in Gyeonggi from Jan. 2004 to July 2005, she was diagnosed with acute leukemia in 2005. Her family attributed the death to exposure to benzene and radiation at the factory at a time when public awareness of workplace-related diseases were low. A year later, her father founded Banolim with other relatives of Samsung workers who became ill or died.

The following 11 years was a long struggle to find some sense of justice or closure. Differences existed not only between Samsung and victims and their relatives, but also among the families.

An arbitration committee was organized in 2014 to accelerate discussions, but its first plan suggested in 2015 fell apart. Samsung tried to pay compensation on its own terms but faced a walk-out from some Banolim members. It was only last March that Samsung and families resumed negotiations.

“Both parties had common ground on the general direction and core agenda that were discussed during the second arbitration process, and yet they still had their differences over small details,” said the committee. “But what was important for us was that from the committee’s view, it seemed like [the differences weren’t so extreme that] choosing one side or the other would be somewhat acceptable for both.”

In between those long 11 years of conflict, the issue forced other tech companies like SK Hynix and LG Display to look into their own working environments. Both voluntarily set up terms for compensation in case of disease outbreaks that could have occurred from working at the companies.

“For fields like semiconductors, in which technology develops with extreme speed, traditional safety standards and systems often have their limits,” said Labor Minister Lee Jae-gab at Friday’s event. “The government will do its best to prevent such accidents in advance and enforce a system that can discover victims in early stages.”