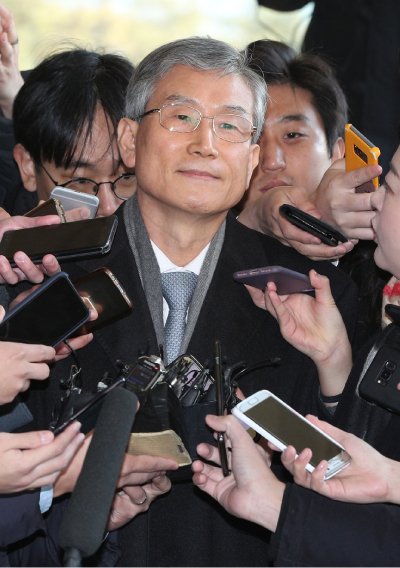 Retired former Supreme Court Justice Ko Young-han is swarmed by reporters at the Seoul Central District Prosecutors’ Office on Friday. He was questioned by the prosecution as a suspect in a widening power abuse case involving the previous court leadership. [YONHAP]

Ko Young-han, a retired former Supreme Court justice, was questioned by the prosecution Friday as a key suspect over alleged abuse of power by previous top court leadership.

Ko arrived at the Seoul Central District Prosecutors’ Office at about 9:10 a.m. The former head of the National Court Administration (NCA), the top court’s governing body, is the third former NCA chief to undergo an interrogation over the widening probe.

“I am truly sorry for causing trouble to the public that cares about the judiciary,” he told reporters. “I just hope that we regain public trust soon.”

Ko is accused of working at the behest of then-Supreme Court Chief Justice Yang Sung-tae to interfere in trials in order to lobby the presidential office of then-President Park Geun-hye for Yang’s pet project. Ko served as the NCA chief from February 2016 to May 2017 and retired in August this year.

He is accused of covering up the wrongdoing of an appeals court judge in the southeastern city of Busan in 2016 after he found out that the judge, surnamed Moon, tried to leak information about the bribery trial of a businessman. Moon had apparently been receiving kickbacks from the businessman.

Prosecutors suspect that Ko used his influence to overlook Moon’s wrongdoing because Moon had close ties with Hyun Ki-hwan, then the presidential secretary for political affairs.

Yang needed their connection to lobby the presidential office for Park’s approval to set up a separate court of appeals, his long-envisioned goal, the prosecution has alleged.

Ko is also suspected of unfairly influencing a trial involving a progressive teachers’ union with the intention of suppressing them, in line with the Park government’s policy.

Prosecutor questioned Cha Han-sung and Park Byong-dae, the other two ex-NCA chiefs, over the allegations and arrested former NCA deputy head Lim Jong-hun for being the key man who carried out Yang’s schemes.