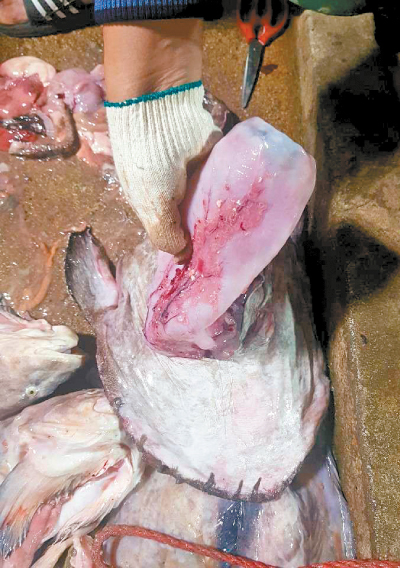 A plastic bottle is found inside a monkfish caught in the waters near North Jeolla this week. [YONHAP]

After a plastic bottle was found inside a monkfish plucked from waters near North Jeolla recently, environmental activists are calling for a systemic response from the government to ensure safe disposal of plastic waste.

A 48-year-old fisherman surnamed Hwang caught some 10 monkfish in the sea near Buan County, North Jeolla, on Monday.

Monkfish are known for wide mouths lined inside with long and pointed teeth. Fishermen consider the fish particularly profitable since they can usually find other species they swallow, like squid or flatfish.

Upon his return to shore, Hwang noticed that one monkfish had a bulging belly. Expecting to find a prey it swallowed, Hwang opened up the fish’s stomach, only to find a 500-milliter (16.9 ounce) plastic bottle.

Earlier in the week, a dead whale washed ashore in Indonesia and was found to have 115 plastic cups in its stomach.

“Hwang opened up the fish and found a plastic bottle, so he sent me a photo,” Lee In-gyu, a member of the Korean Federation of Environmental Movement’s North Jeolla branch, told the JoongAng Ilbo. “It shows that the marine debris issue is quite severe in Korea.”

“But we’re finding more plastic and trash inside fish these days,” Hwang said. “I’ve found vinyl products, cans and pieces of plastic inside some fish, and the type of the fish is not limited to monkfish. I’ve found plastic waste inside mudskippers and bartail flatheads, too.

“It is worrying,” Hwang said, “because people don’t seem to care for the environment.”

Some environmentalists said it was a wake-up call.

“When the news about the dead whale broke, it seemed like something happening quite far away,” said Lee Jeong-hyun, secretary general of the Korean Federation of Environmental Movement’s North Jeolla branch. “But the news about the monkfish that swallowed a whole plastic bottle shocked me. This is a warning for us all.”

According to a UN report published in 2017 at the Ocean Conference in New York, more than eight million tons of plastic waste are swept into the oceans every year and, at that rate, by 2050 oceans will hold more plastic than fish.

Lee called for a government commitment to reducing waste in the coastal areas.

“There’s so much trash by the beach and in the coastal areas,” Lee said. “The government should come up with a more systemic response to collect sea-side waste in time.”

The Ministry of Oceans and Fisheries collects some 70,000 to 80,000 tons of waste in coastal areas every year, but it says it cannot collect everything before it’s swept into the ocean.