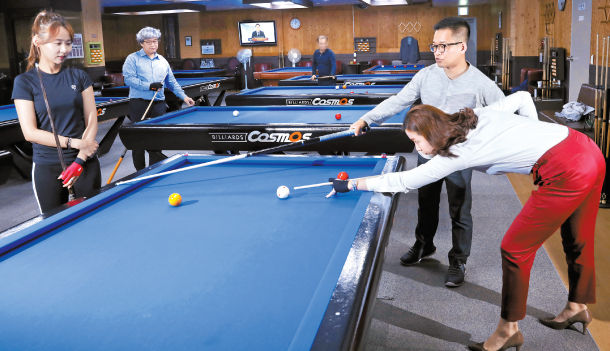 Billiard coach Ju Jeong-mo, second to right, teaches a student billiards at the Gangnam Billiard Academy, which is located near Seolleung Station in southern Seoul on Nov. 6. Owner Oh Nam-hoon, second to left, says “[the academy] has seen a recent increase in female members.” [KIM KYUNG-BIN]

But ever since a smoking ban went into effect at billiard halls last December, the atmosphere at many establishments has rapidly changed. Now, many families are now gathering to enjoy the sport together at the smoke-free venues.

Billiards competitions air on almost every sports channel, and it’s a relatively easy sport to pick up and play for both the old and young. There are around 25,000 billiard halls across Korea.

These halls have become a popular destination for co-workers as well. In the past, after dining together, co-workers would often venture to noraebang (karaoke rooms) or bars for boozy nights. Now, instead of going out for karaoke and alcohol, many groups go to billiard halls after work for a game before heading back home.

“When we first introduced the smoking ban, we did see a drop in the number of customers coming in. However, we are now slowly recovering [from the dent],” said the owner of a billiard hall near Seoul City Hall in central Seoul.

“Female customers, especially, have increased ever since the smoking ban. [The ban] not only benefits our non-smoking customers, but makes life easier for the owners, since we don’t have to sit in a smoky room all day.”

On Nov. 6, the Gangnam Billiard Academy, located near Seolleung Station, southern Seoul, was buzzing with activity. This academy does not accept people who come to play billiards for fun — it’s for people who are serious about learning to play well.

A neatly-dressed middle-aged man was playing billiards alone, while others were under the instruction of a coach.

A high school student, whose dream is to be a professional billiards player, was practicing. The academy has about 60 members that pay 350,000 won ($309) per month for three lessons each week.

“[Among our customers], the baby boom generation that is just now retiring make up the majority,” said owner Oh Nam-hoon, who bought the academy four years ago. “Some have even come to learn about the management process because they wanted to open and manage their own halls once they retire. Of course, there are a lot of members who come to us because they want to increase their skills.

“Nowadays, many people who graduated high school together come to enjoy each other’s company in billiard halls. Many seek to bond over playing billiards because pastimes like golf are too expensive, and the culture of drinking out with your friends has died down somewhat. I have even seen some people come here without telling their friends, just so they could hone their skills to ensure they win against them in their next match.”

True to Oh’s testimony, as our photographer tried to take pictures of people taking a lesson, many members fled the scene, saying that no one was supposed to know they were there.

Oh also confirmed that the number of female members has also increased ever since the smoking ban went into effect. He said that it warms his heart whenever he sees a man coming to register with his wife or daughter for a joint lesson.

“Billiards is a sport that is not restricted by weather or seasons, and you don’t need to be strong and fit to be a billiards player,” said Oh. “You can enjoy the sport for a good twenty years even after you’ve learned it in your sixties. This is why it’s becoming so popular with the older generation.”

There are three major subdivisions within billiards: carom billiards, pool and snooker. Normally, Koreans play three-cushion billiards, which is a carom sport.

This game requires the player to make contact with two balls and three rail cushions. Since the game is very difficult, many players start to play four-ball billiards before attempting to play three-cushion billiards.

In four-ball billiards, players are required to hit two out of three balls on the table with the cue ball, regardless of the number of cushions the shot hits in the process.

This game requires the player to anticipate the different rotations and angles for each shot.

Snooker is the version of the game that first started among British military officers stationed in India. Players must use cue balls to pot the remaining balls in a certain sequence, accumulating points for each pot.

Pool is a simplified version of snooker that is most popular in the United States. Its popularity has now moved to Asian countries. In Japan, the 1984 pool movie “The Color of Money” was a hit, increasing the Japanese public’s interest in the sport.

The success of Sruong Pheavy, a Cambodian carom player, is also a hot topic amongst billiard players. Sruong, who came to Korea to marry her husband, started practicing billiards after she followed him to the hall one day.

She won the bronze medal in the 2018 World Championship Ladies 3-Cushion in Turkey. Sruong received a cash reward of $15,000 from the Cambodian government for her win.

The National Billiard Competition was held in Yanggu County, Gangwon, from Oct. 31 to Nov. 3. Around 1,400 players were divided into two leagues and competed against each other for five days.

In the champion’s carom league, Kim Haeng-chik defeated Cho Jae-ho to win the tournament. As of this year, 1,016 billiard players are registered with the Korea Billiards Federation.

“I am pleased to announce that the popularity of billiards has increased as of recently,” said Na Geun-ju, the secretary general of the Korea Billiards Federation. “The income that comes from selling TV rights, deals and sponsorships has increased as well.”

This year’s budget for the Korea Billiards Federation is 3.8 billion won, twice what it was five years ago. The only problem for the federation is that billiards in Korea almost exclusively focuses on carom.

Each year, 30 billiard competitions open nationwide. The federation sends 80 percent of their players to carom competitions, 18 percent go to snooker competitions and the remaining two percent compete in pool competitions.

Korea is somewhat out of step with international trends, as pool is the most popular billiard sport globally, followed by snooker and carom. According to the Korea Billiards Federation, pool, which is more popular among women, should receive more support.

“In addition, we have to figure out ways to effectively manage all our registered players, promote judges and work towards manufacturing more billiards products in Korea,” said Na.