Relatives reunited - but in photos only

Relatives reunited - but in photos only 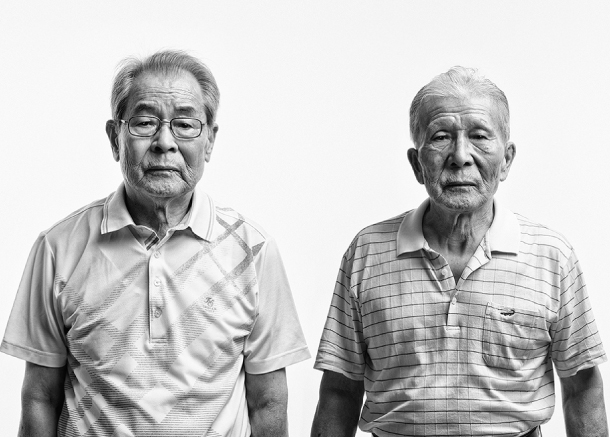 Two old men with thinning gray hair stand side by side, staring back at the camera lens in front of them. They look so alike that no explanation is needed for their relationship.

The 152-centimeter-by-195-centimeter black-and-white photo is part of Byun Soon-cheol’s “Eternal Family” series, intended to realize the dreams of family members who were separated during the tragic 1950-53 Korean War to be reunited, even in virtual reality, with their loved ones.

In 2015, the commemorative project was shown as an homage of Korea’s 70th anniversary of its liberation from Japanese colonial rule (1910-45). The project wouldn’t have been possible without the help from many organizations, the photographer said during an interview with Yonhap News Agency on Tuesday.

Through the Red Cross, Byun contacted separated family members in the South who still keep photos of their family members on the other side of the barbed-wire border.

The collected photos were sent to the Korea Institute of Science and Technology (KIST) to recreate their aging images using a face-aging technique and later edited for composite “family photos.”

“When they stood in front of the camera, I could immediately see their deep sorrow in their eyes. Their eyes tell it all, the sadness of not being able to see their family for nearly 70 years,” he said. “Words are superfluous. I just deliver their real stories.”

Byun, 49, is one of the country’s most recognized portrait photographers.

His near-death experience while serving in the military and becoming bedridden for the following year was a turning point for him, he said.

“I learned that when your body is sick, your mind becomes sick too,” he said, recalling the darkest patches of his life. While in the hospital, his brother brought him a photography book to read, and he was captivated. It helped him find a new purpose in life.

In the late ‘90s and early 2000s, he studied photography at the School of Visual Arts in New York.

“You can’t do art that doesn’t reflect your life. I was lonely and felt isolated in New York, and that was where art came into play,” he said.’

When he came back to Korea, he found himself looking at things differently. He started following the itinerant “National Singing Contest,” one of the country’s longest-running television programs that started in 1980, to capture ordinary Koreans.

“They might all look excited and happy. But in fact, they are sad. They have a lot of sorrow inside,” he said. Over the past decade, he shot around 3,000 people at the contest venues around the country.

“The photos, I think, show a real Korea. Art is near us. It is not far away.”

The “Eternal Family” project, which was previously shown in 2015 at the Chosun Ilbo Art Museum under the name “The Last Wish,” gave him a chance to think about the question: “Who and what is this separation for?”

“When you look into their eyes, you could feel the desperation that we can wait no more. I hope this exhibition can work as a stepping stone for more exchanges (with the North),” he said.

The exhibition runs through Jan. 13 at the Arario Gallery Seoul Samcheong. Admission is free. The gallery is closed on Mondays. Go to Anguk Station, line No.3, exit 1, and walk for 10 minutes. For details, visit www.arariogallery.com or call (02) 541-5701.