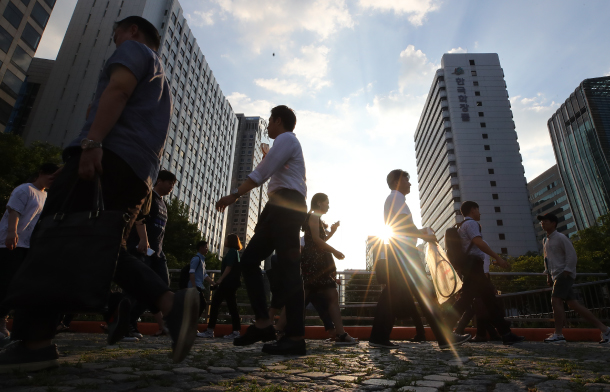 People start their day on July 1, when the new 52-hour workweek was implemented for companies with more than 300 employees. [YONHAP]

Kim In-soo, a 31-year-old office worker, tends to go home early after a quick drink with his friends.

Since the 52-hour workweek was implemented in July, Kim only really drinks with his close friends, a major change from the old days, when he used to spend countless hours drinking with his boss or colleagues after work.

Since working hours were reduced, there has been a significant shift in consumer habits and spending.

In fact, since the shorter workweek came into effect, restaurants and bars have seen revenue shrink as the longstanding culture of company dinners has started to disappear and more people are spending time and money on personal hobbies and cultural experiences.

According to Shinhan Card, casual bars that sell single glasses of wine for about 3,000 won ($2.65) are on the rise, while the total amount spent on alcohol is steadily decreasing from 54.5 billion won in the third quarter of last year to 49.5 billion won over the same period this year. 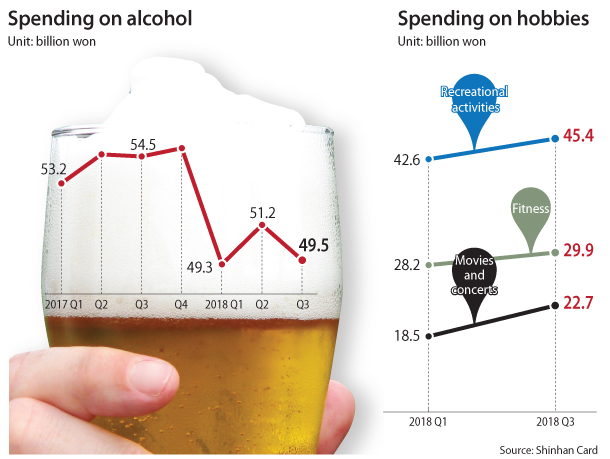 More people are eating at home and spending more on side dishes, also known as banchan.

“A decrease in payment in alcohol-related sectors and a rise in banchan, as the 52-hour workweek establishes itself, could be understood as people having more free time,” explained Kim Hyo-jeong, head of big data business at Shinhan Card.

Spending in theaters and concerts increased from 18.5 billion won to 22.7 billion won over the same period.

According to Kakao Mobility, which operates taxi-hailing service Kakao Taxi, taxi-hailing times have also shifted in business districts across Seoul.

People are also spending more time on leisure activities, according to Kakao Taxi data. Taxis used to travel to theaters increased by 118 percent this July to August compared to the same period last year. Taxi hailing to gyms also jumped up by 159 percent.

The shift in after-work activities from company dinners to personal leisure activities has been welcomed by large companies in a survey by job portal Saramin.

Seventy-five percent of large corporations said they experienced a positive change with the 52-hour workweek, with the top reason given as an increase in work efficiency, in line with the original intent of the policy.

Other popular reasons included increases in work morale and productivity.

“Office workers are now finding a work-life balance after not being able to leave work and being dragged to company dinners,” said Lee Byoung-hoon, a sociology professor at Chung-Ang University. “If the 52-hour workweek spreads to small and medium-sized companies, this change will spread across our society.”

Hurdles, however, remain for all companies to enjoy the work hour reduction.

Nearly 70 percent of small and medium-sized companies that will be affected by the law from 2020 said that the reduction in hours will be a negative change, largely due to a rise in wages.

On areas that need improvement, economic and policy support to maintain wages ranked first, followed by the selective application of workweek hour reduction by sector and region.