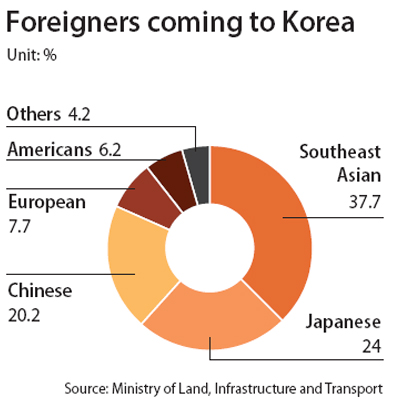 Chinese tourists are on the rebound, although their numbers haven’t returned to the levels before Seoul and Beijing fell out over the deployment of a U.S. missile defense system in Korea.

According to the Ministry of Land, Infrastructure and Transport on Sunday, the number of people that took either an international flight into or out of Korea or a domestic flight in October totaled 10 million, a 6.8 percent increase compared to the same month a year ago. It said it was the largest number of flight passengers recorded in any October.

In the first 10 months of this year, passengers on flights in or out of Korea amounted to 71.4 million, up 12 percent from 63.6 million a year earlier.

“International flight passengers grew in October largely due to the expansion of budget airlines’ international flights as well as the long holiday that helped Koreans travel abroad and China partially allowing group tours to Korea,” a Land and Transport Ministry official said.

In October, some 1.48 million people traveled to Korea from China or the reverse, which was a 23 percent increase. This was largely thanks to an easing of group travel ban that was imposed by the Chinese government to protest the deployment of the terminal high altitude area defense (Thaad) system in Sangju, North Gyeongsang.

Despite the recent rise in Chinese tourists, it is still 12.7 percent smaller than the 1.7 million that visited in October 2016 before the Thaad situation escalated between the two countries.

The ministry said the situation has been improving since July.

Travelers from other countries have grown as well, including Europe, which grew 15.4 percent, and Southeast Asia, up 11.6 percent. Passengers from Japan were up 8 percent.

Passengers traveling from the Pacific decline in October. Travelers from New Zealand were down 17.6 percent to 8,682 while those from Hawaii fell 18.2 percent to 46,398.

Among foreign countries, Southeast Asian travelers accounted for the most, taking up 34 percent, followed by Japan with 24 percent. Chinese tourists accounted for 20.2 percent.

The increase in travelers owes much to budget airlines expanding flights and routes.