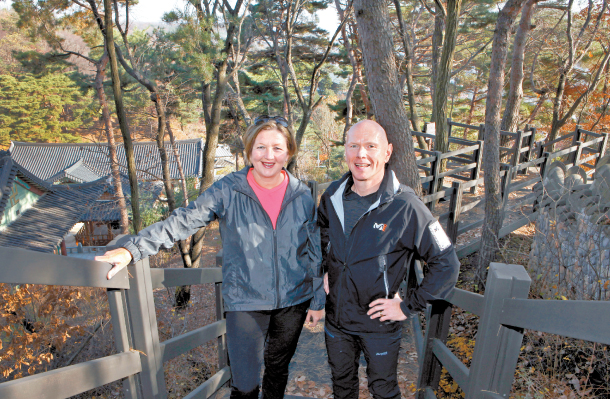 Ambassador of Norway to Korea, Frode Solberg, right, and his wife Herta Solberg on a trail on Mount Bugak in central Seoul on Nov. 12. [PARK SANG-MOON]

Just a few steps into the woods — that’s how a Norwegian couple finds a feeling of home in Seoul.

“The impression you have when you walk into the woods, it’s not that different from Norway,” said Norwegian Ambassador to Korea Frode Solberg as he traversed a trail on Mount Bugak just a few minutes by foot from his home in Seongbuk District, central Seoul.

“We found out very soon after we arrived here that we can easily go into the forest just as easily as we do in Norway.”

It was a November afternoon and the trail, covered in dry leaves, was empty for a while until a man walked up behind the couple.

He was wondering if the trail led to anything.

“Go up this way and you will see a guard post,” Herta Solberg, wife of the top envoy, told the stranger. “Turn right, and you will come to a nice plateau.”

The man thanked the couple and moved on.

“We call that area the sunset zone,” she told a reporter. “It’s the perfect place to watch the sun set, to see the rays hit the top of the trees and buildings below.”

The Solbergs have been in Seoul for a few months and they feel more at home than ever — particularly because of the proximity to nature.
“We come from Jessheim, which is a very small town compared to Seoul,” said Frode Solberg. “But the everyday life here is not that different.”

“I walk on the trail almost every morning,” said Herta Solberg. “Back home, we had a cottage by the lake just an hour and 15 minutes away by car from Jessheim. And we’d go there for a little walk in the woods.”

They’re not afraid to try new trails because if often leads to discoveries — a metaphor for their assignment to Seoul.

“It was even better,” said the envoy when asked how his experience in Seoul has been compared to his initial expectations.

“Home is where you are and where your stuff is,” said Herta Solberg. “And that’s how we taught our children, too, who grew up in different countries. A house is a just a shell, in a way. Seoul is our home now.”

After the hike, the Solbergs opened their home to the Korea JoongAng Daily to speak about the natural landscapes and some of the changing cityscape in Oslo, their country’s capital, as well as budding cooperation on the seafood trade and green energy between the two countries.

Left: Herta Solberg at Lake Satten, east of Oslo, in October 2017. Right: The inlet of Bjorvika ― an area east of the city center of Oslo ― used to be a cargo container port. Since 2000, it has been transformed into a residential and commercial district. [HERTA SOLBERG, VISIT NORWAY]

Q. Is a mountain trail easily accessible for many Norwegians?

A. Frode Solberg: Since we are only a little more than five million people in a land more than three times the size of Korea, we are used to using nature — skiing and walking in the mountains are what most Norwegians are used to doing over weekends.

Herta Solberg: The outskirts of Oslo are mostly forestland — so you can see people bring their skis on the subway. They get off at a stop, put on their skis and start cross-country skiing.

If a Korean hiker went into the woods for a walk in Norway, would he or she find the landscape quite different?

Herta Solberg: I hike almost every morning on Mount Bugak before other activities. But I would say that the impression of the mountain ridge here is not too different from what you’d find in Norway. But we don’t have the same system of stairs laid out on trails.

Frode Solberg: I would add that some of the natural landscape in Norway is more dramatic, like the fjords where some mountains that are some 1,000 meters (3289 feet) high drop into the ocean. These you will see in the western coast of Norway. On the eastern coast, near Oslo, the area is more flat.

Herta Solberg: You can also explore the northern area of Norway to experience the midnight sun in the summer time and the aurora borealis in the winter time.

People often associate Norway with the Disney movie “Frozen,” perhaps because of the fjords, the ice trade and the snowy mountains.

Frode Solberg: Right, one stereotype people may have about Norway is that it snows all the time and that it’s very cold. But it’s actually not as cold in Norway because we have the Gulf Stream that flows all the way from the Caribbean through the Atlantic Ocean. On some winter days it’s colder in Seoul than in Oslo.

Herta Solberg: The ice trade happened before the invention of refrigerators — to preserve fish and meat during the warmer seasons.

Norway is known for its seafood industry. Where does seafood bilateral trade stand?

Frode Solberg: South Korea is our fifth largest trade partner and the most exciting and interesting market for seafood nowadays — Korea is our No.1 mackerel market. We export some 200 tons of seafood to Korea every day. Norwegian companies in the maritime industry are located in Busan and Ulsan and we have close relations with shipyards and the maritime industry here. Korean shipbuilders are building ships and oil rigs for the Norwegian continental shelf.

Any budding businesses between the two countries in other sectors?

Frode Solberg: Korean carmakers have had success when it comes to electric cars in Norway. They are very popular — you have to get on a waiting list to buy a Hyundai Kona or a Kia e-Niro. I think they have done a good job in producing good electric cars with long ranges, which suits the needs of many families in Norway.

We will continue to work closely with Korea on the sustainable management of oceans and arctic affairs. Korea has a research station in Svalbard, a Norwegian island group, called the Korea Polar Research Institute. 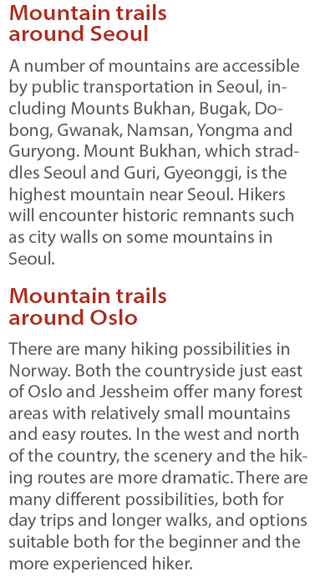 Tell us about some of the changing cityscape of Oslo.

Frode Solberg: Oslo used to be a harbor city — there was a container cargo area and the shipyards. But it has absolutely changed in the past 15 to 20 years, with more shopping and dining areas established throughout the city and new structures like the opera house the new Munch museum coming into the city. The museum, called Lambda, will be completed in 2020 and will be one of the world’s largest museums dedicated to a single artist.

Herta Solberg: Coming from Korea, you may find it a small city, but it also means you can move around by foot to visit the cultural attractions. The famous ski jumping area is just half an hour drive from the city and you can go swimming in the ocean at the city center, too.

What makes you feel at home in Korea?

Frode Solberg: This is my first posting in East Asia. Norway and Korea have a long-standing partnership. We are celebrating 60 years of diplomatic relations next year. But even before the official ties, we had Norwegians participating in the Korean War through a field hospital called Normash, and more than 100 doctors and nurses stayed for another 10 years after the war. This cooperation has led to the establishment of National Medical Center, which is celebrating its 60th birthday.

Herta Solberg: You asked earlier if Korea was different from what we expected — I don’t think so.

Frode Solberg: It was even better: every day we feel privileged to be here. 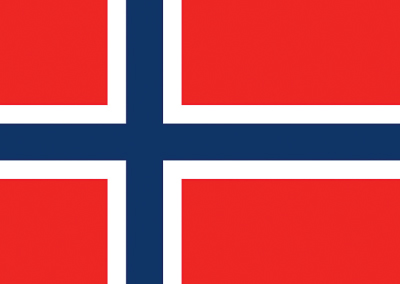 Korea is Norway’s fifth largest trade partner. Last year more than 60,000 tons of salmon, mackerel and king crab were exported from Norway to Korea. In the future, the two countries intend to expand cooperation on sustainable energy and green shipping.

Normash is short for the Norwegian Mobile Army Surgical Hospital, which operated during the Korean War (1950-53) to provide immediate surgical procedures for injured soldiers. It was first located in Uijeongbu in Gyeonggi but moved northward to Dongducheon, nearer to where the demarcation line stands today. A total of 623 Norwegians served at the hospital including 300 doctors and nurses. The field hospital closed its operations in 1954 but many doctors and nurses stayed on for years. Norway is estimated to have 6,500 Korean adoptees in the country, many of them adopted after the Korean War.

Frode and Herta Solberg arrived in Seoul last July. Ambassador Solberg was a lieutenant and captain in the Brigade North of Norway prior to his career in the foreign service. He was previously posted to Austria, the United Arab Emirates and Germany. Herta Solberg was educated as an arts teacher and language teacher (German and English) and interior designer. She worked as a teacher at the elementary and secondary levels in Norway and the United Arab Emirates, and as an interior design at an arts school in Stockholm.