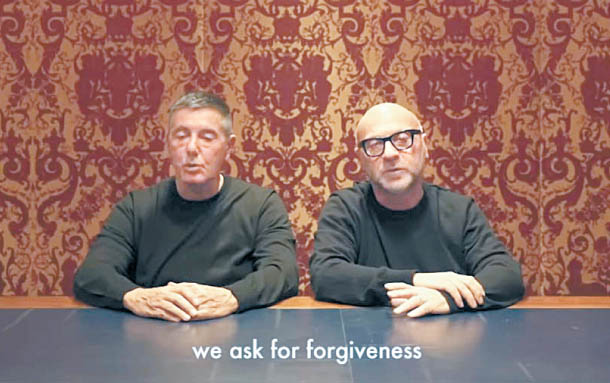 BEIJING - The co-founders of Dolce&Gabbana apologized on Friday in a video on Chinese social media after promotional videos seen as racist and subsequent Instagram messages stoked a furor in one of the world’s largest markets for luxury goods.

Domenico Dolce and Steffano Gabbana appeared in a nearly one minute video posted on Weibo, a Chinese version of Twitter, saying they hope to be forgiven and will do their best to better understand and respect Chinese culture.

“We have always been in love with China,” said Dolce. “We love your culture and we certainly have much to learn. That is why we are sorry if we made mistakes in the way we expressed ourselves.”

The Italian fashion house has been in hot water for the videos and subsequent insulting remarks made by the Instagram accounts of both the company and Gabbana. It blamed hackers for the Instagram comments.

The three promotional videos, which have been deleted from the company’s Weibo account, feature a Chinese woman using chopsticks to eat pizza and other Italian food. Many Chinese social media users called the videos racist and full of outdated stereotypes.

In the apology video, the two designers wore black long-sleeve shirts, the kind they often wear to runway shows, and sat with their hands folded at a large conference table in a room decorated with formal, red-gilded wallpaper.

“We will never forget this experience and it will certainly never happen again,” Gabbana said, adding, “From the bottom of our hearts, we ask for forgiveness.”

They finish the video by saying “sorry” in Chinese.

The backlash forced Dolce&Gabbana to cancel a major extravaganza earlier this week that the company had billed as one of its biggest shows ever outside of Italy. Chinese purchases at home and abroad account for about 30 percent of global luxury goods sales.

Zhang Ziyi, who starred in “Crouching Tiger, Hidden Dragon,” said on one of her social media accounts that the Italian brand had “disgraced itself.” Chinese pop idol Karry Wang and actor Dilireba, both Asia-Pacific brand ambassadors, have informed the company that they will terminate all cooperation.