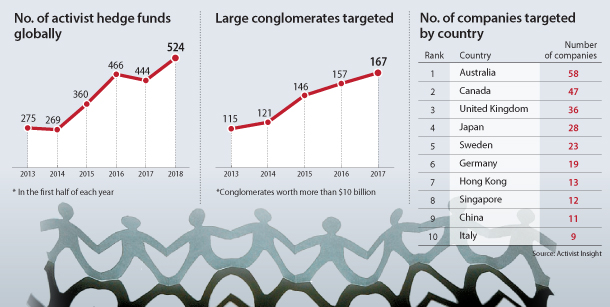 Although activist shareholders were cast in a negative light just 20 years ago, investor activism is now an established part of the global and local shareholder environment.

Shareholder activism refers to investment methods in which shareholders increase their stake in a target company and exercise their rights to influence that company. By becoming a sizeable force, activist shareholders take “active” measures to reap profits, such as demanding dividend increases, replacing the management or even taking an active role in selling the company.

The number of local investment funds and asset management companies with activist tendencies has become increasingly notable in the local financial market.

On Nov. 15, a homegrown activist private equity firm, Korea Corporate Governance Investment, reported that it had a 9 percent stake in Hanjin Kal, the parent company of Korean Air. The news put pressure on the group, which has gone through numerous controversies in recent years including the “nut rage” and “water range” incidents caused by family members of the group’s chairman.

The recent challenges made by activist shareholders are a far cry from the well-known disputes between foreign activist hedge funds and local giant conglomerate groups such as Carl Icahn against SK Group and Elliott Management’s pressure on Samsung and Hyundai Motor Group.

The number of large corporations with a market capitalization above $10 billion targeted by activist hedge funds has also increased, from 115 in 2013 to 167 last year.

The driving factor behind the increase in activist hedge funds is their ability to generate high profit.

According to Hi Investment & Securities, the average earnings rate for companies invested in by activist hedge funds since 2006 is over 50 percent.

Although Korea ranks outside of the top countries that have the most activist hedge funds or companies targeted by those hedge funds, it is considered a market with high growth potential due to the changing regulatory environment that places value on shareholder return.

Recent government policies, such as the National Pension Service’s stewardship code, that demand a more responsible role from institutional investors reflect the change toward empowering shareholders.

Last year, the average dividend payout ratio for local public companies was around 16 percent, far smaller than the average 34 percent rate in Japan or 30 percent in China.

For activist hedge funds, investing in Korean companies when the dividend payout ratio is low could promise higher returns.

But there are also concerns that fast growth is unlikely.

“As [shareholder activism] has become a major investment method abroad, there is a need for change in the local perception,” he added.

“There is a limit to individuals participating, as activist funds take a long time, an average of three to five years, in investing, and have complex asset management strategies,” said Kim Hu-jung, an analyst at Yuanta Securities.

There are also calls to increase the defense mechanism against the growing wave of activist investment.

“There could be risk to a company’s management stability as [activist investment] is not based on a long-term perspective but is focused on selling the stake after taking in short-term profit,” explained Yoo Jeong-ju, head of the industrial innovation team at the Korea Economic Research Institute.

“Korea could give more voting rights to certain stocks and start discussions on incorporating defensive measures such as dual class stocks that ensure control,” Yoo added.