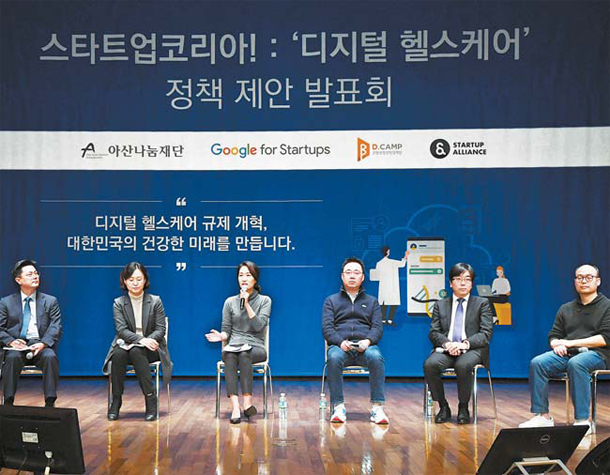 Panels of health care experts from the public and private sectors engage in a discussion at the Startup Korea! Digital Healthcare conference held on Thursday in central Seoul. [THE ASAN NANUM FOUNDATION]

Despite its rapidly aging population and extremely high smartphone penetration rate, Korea is behind in digital healthcare.

On Thursday, local startup support organizations and accounting firm Samjong KPMG released a list of the world’s top 100 digital healthcare startups by investment: none were from Korea.

An analysis of the companies showed that 63 wouldn’t have been allowed to do business in Korea due to healthcare regulations. Those companies accounted for 75 percent of the $1.8 billion in investments in the top 100. 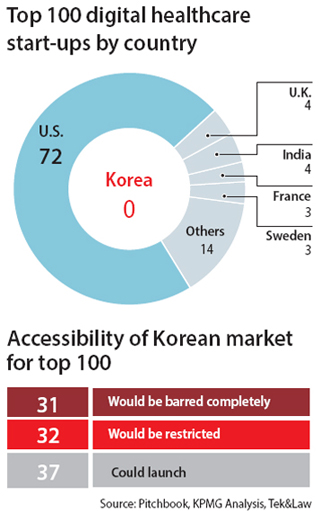 According to the report, 90 percent of medical institutes in Korea keep a digital data base of patient records. That digital resource is not being tapped by startups in the field.

The report suggested that regulations were inhibiting startups.

For example, Korea has a strict ban on telemedicine, which refers to diagnosis and treatment of patients without a face-to-face meeting with a medical professional. Doctors are not allowed to remotely monitor a patient’s health. The rules are looser in countries like the United States where 23 percent of patients responded that they have been treated through telemedicine in a survey this year.

Direct-to-consumer (DTC) gene tests people can take at home are limited. Gene tests can pre-emptively warn of diseases likely to occur. While technology is lowering price barriers for gene tests worldwide, Korea only permits them to deal with 12 health factors, many of them minor, such as hair loss.

Rigid laws on data usage are another barrier for startups. Domestic law forbids collection and usage of data without specific permission, even if it cannot be traced to individual patients. Regulations on medical information were slightly eased in 2016, but the rules still have gray zones that leave startups exposed to possible legal trouble.

“As of yesterday, we accumulated database information of over six million children in our system but we can’t use it,” said Park Jong-il, CEO of Mtreecare during a panel discussion on Thursday. Mtreecare developed a smart thermometer connectable to smartphones.
“Digital healthcare is developing with remarkable speed overseas, but it’s not happening in Korea,” he added.

In terms of government paperwork, healthcare startups face a long and complicated evaluation procedure of at least 500 days to launch products. Startups often come up with totally new products and services, which requires even more paperwork to prove their safety and effectiveness. In other countries, the process is faster.

The report suggested that the government ease regulations on telemedicine, DTC gene tests and clarify regulations for usage of de-identified health information. To shorten the time it takes to launch a company, it recommended a fast-track process for healthcare software services and a long-term approach to developing new standards and workforce to evaluate digital healthcare products.

“Korea has to establish an environment in which local startups can at least release digital healthcare products at a similar pace as global startups,” the report said.