Searching for inner peace in the app store

Searching for inner peace in the app store 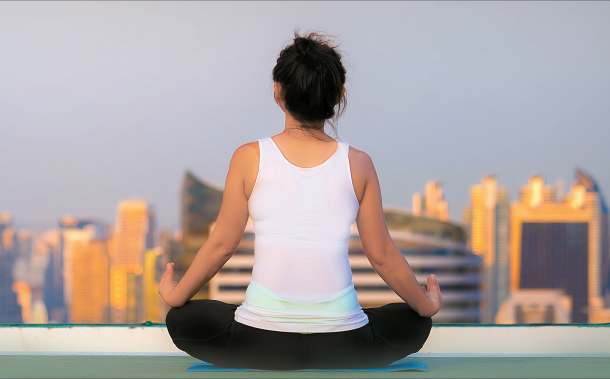 For most Koreans, the word meditation conjures up images of temples and Buddhist monks nestled deep in the mountains. The idea of meditation suggests tranquility, but in a religious sense.

That’s all starting to change though, as meditation has found a new relevance in a digital era where people are constantly bombarded with information and messages from smartphones and other technology.

Meditation may still seem like an abstract concept a million miles away from real scientific theory, but in the last few years, a growing number of business have sprung up in Silicon Valley that brought meditation back to the mainstream - with apps.

The top 10 wellness apps earned $27 million in revenue worldwide for the first quarter of 2018, with more than 90 percent of that figure coming from meditation apps Calm and Headspace, according to analysis firm Sensor tower. Last year, the number of meditation apps worldwide surpassed 1,300.

Close your eyes and take a deep breath - Korea is just starting to join the meditation app trend.

The first local app to offer meditation guides in Korean was Mabo, launched in September 2016. It offers nearly 190 meditation guides that last between three and 20 minutes. Users can browse the app to find a guide that best fits their current emotion - like anger or disappointment - or circumstance, such as “On your way to work” or “When you’re craving a cigarette.”

“It’s not a background sound like ASMR; it’s a guide that helps you experience” said CEO You Jung-eun. “If I tell you to breathe or imagine something, you do just that - it’s a two-way process with me talking and the user following, rather than simply listening and letting the audio drift away.”

You recorded most of the guides in the app herself and is well-known among users as the “Mabo Keeper.” Unlike many apps that offer services for free at first and find ways to charge users once they develop a thick user base, Mabo began life as a paid app.

After a free trial week, Mabo users can choose one of four paid subscription options. Twelve percent of trial users become full subscribers, according to the company.

“That’s a pretty high number for a subscription model,” said You. “Quarterly revenues have jumped 80 percent since Mabo’s launch.”

Sales at Mabo were constantly growing, but it was just last year that the increase in subscribers noticeably sped up.

“At first, even I thought it would be an app for a small group of enthusiasts. Recently, numbers have been really shooting up,” she said. “It’s surprising because we never really conducted marketing activities or ads.

“It’s part of a wave that will eventually come one day. Our lifestyle is changing - the well-being trend in the past raised awareness to take care of the body; the same will come for one’s mind and emotions.”

Another domestic player in the field is the Maum Chaenggim, which means mindfulness in Korean. The app launched in May this year but already has more than 400 meditation guides. This is possible because Maum Chaenggim has more than 20 meditation professionals uploading audio guides to its platform. Among them are psychology professors, therapists, monks and a nun.

CEO Kim Byung-jeun was the one that brought their voices together in a single app. He visited all of them in person, persuaded them to take part and edited their scripts.

“I wanted to work with credible people - real professionals in meditation,” he said. “And the most dominant reason they joined was because they agreed with my cause: to spread meditation and make it something anyone can enjoy.”

Maum Chaenggim has been downloaded over 17,000 times so far, not a bad record for a new app that barely invested in marketing or public relations. Another big achievement for the young app is its partnership with mobile carrier KT.

“Combined with technology and data, there might come a day when we’ll be able to suggest personalized guides or combine hologram technology for meditation,” added Kim.

Mindfulness is the process of focusing attention on the present. To achieve this goal, apps ask listeners to concentrate on their breathing and the way their body moves and feels.

Advocates of mindfulness meditation say that, with enough training, users will learn to better control their emotions in unpleasant situations. Nearly four decades of scientific research has found a wide array of positive uses for meditation, including tackling issues relating to stress, self-esteem, concentration, depression and trauma.

Meditation is nothing new in the world of business either. Starting with Google in 2007, a number of global companies like Apple, Intel, P&G and Barclays have launched meditation programs for their employees.

Maum Chaenggim CEO Kim, who has been practicing mindfulness meditation himself for the last decade, said he first discovered it while working as a human resources consultant.

“A curiosity that came from evaluating clients’ executives was that most of them were performing below their potential - not because they were not competent, but due to a lack of self-awareness and self-regulation,” he said. “Meditation trains people to grow the habit of constantly looking inside yourself from a more objective view, even when you’re emotional. That’s the grounds for self-awareness.”

In May 2017, Samsung Electronics launched a four-day meditation program for its employees at the company’s training center in Yeongdeok County, North Gyeongsang - located by the sea and surrounded by trees.

A month earlier in April 2017, LG Display opened the doors of its staff Healing Center in Mungyeong, North Gyeongsang, transformed from an abandoned school. It runs several meditation programs including one that combines a tea ceremony and a session that involves singing bowls, a well-known meditation tool for Buddhist monks in Tibet. LG was one of the earliest companies in Korea to open a meditation room inside the company’s headquarters in the mid 2000s.

“The main purpose is to help our staff bring peace to the mind,” said an LG Display spokesman. “A mind in comfort will make coming to work a little more enjoyable, which leads to work efficiency as well.”

SK Group is providing support to the Center for Contemplative Science under the Korea Advanced Institute of Science and Technology (Kaist). The center, which opened in September last year, aims to scientifically define how mindfulness meditation can lead to such positive effects.

In the long term, it also aims to develop meditation programs that can one day be distributed to schools, smaller companies and the general public.

“When it comes to meditation, Western countries are 30 years ahead of Korea - it’s widely practiced in a variety of fields like medicine and law,” said Kim Wan-doo, the center’s head. “Meditation has its roots in Asia, but until now, its distribution [in Korea] was limited by religion boundaries and a somewhat distorted, superstitious image.

“The center aims to redesign this perception and develop ways to help more people feel satisfaction in their lives.”