Gyeonggi’s governor gets a 13-hour grilling

Gyeonggi’s governor gets a 13-hour grilling 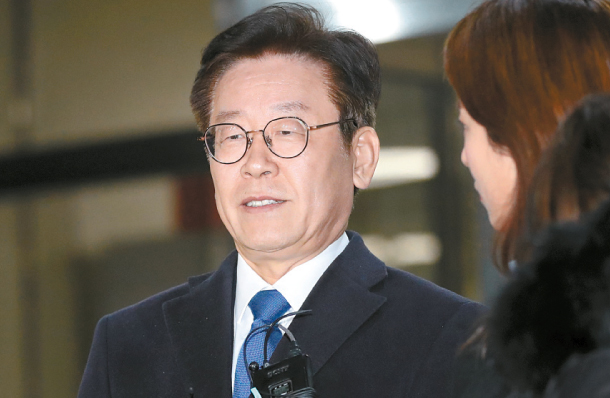 Gyeonggi Gov. Lee Jae-myung denied all allegations against him during a 13-hour interrogation at the Suwon District Prosecutors’ Office in Seongnam, Gyeonggi on Saturday, telling reporters as he left the building that he hoped prosecutors hadn’t investigated him “after setting down [their own] answers.”

Lee is also accused of spreading false information about a Seongnam development project when he was running for Gyeonggi governor last June to earn more votes. Prosecutors also believe that, during the campaign, he denied the fact that he had to pay a 1.5 million won ($1,300) fine in the past for impersonating a prosecutor.

On Saturday, prosecutors said they will decide whether to indict Lee on charges of violating domestic election laws and abusing his authority to force his brother into a mental institute after further review.

Lee told reporters camped outside the prosecutors’ office on Saturday that he’d focus on his work for his province.

Lee’s questioning came a week after Gyeonggi police announced they would formally recommend that prosecutors pursue a defamation case involving Lee’s wife, Kim Hye-kyung. The case was sent to the same Suwon District Prosecutors’ Office that grilled Lee over the weekend. Kim has been accused of using Twitter to denounce Lee’s political rivals since 2013 by spreading false rumors. Among the targets were President Moon Jae-in, who faced off against Lee in the Democratic Party primaries for the May 2017 presidential election.

Both Kim and Lee denied the allegation. Lee said Kim wasn’t the owner of the Twitter account and criticized the police for waging an unfair investigation.

Lee, a former lawyer, tried to add a fresh twist to the scandal on Saturday when he wrote on Facebook before his questioning that in order to prove the Twitter posts contained false information, Moon’s son will have to prove he got his job fairly. Several posts under the Twitter account had accused Moon’s son of using links to his father to land a job.