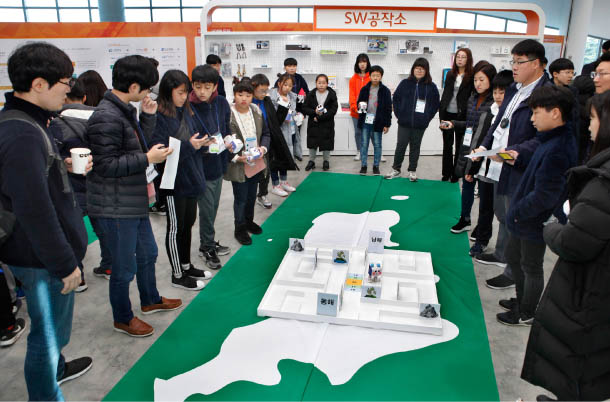 Elementary school students watch their robots move according to preprogrammed commands as part of a coding competition hosted by the National IT Industry Promotion Agency (NIPA) and the Ministry of Science and ICT at the Gangneung Green City Experience Center in Gangwon on Sunday. [PARK SANG-MOON]

The convention hall was brimming with energy as dozens of children bustled around, awaiting their turns to show off their skills as future programmers.

These aspiring coders - a total of 90 elementary school students from Gangneung, Incheon and South Jeolla - took part in a two-day Software Experience Event at the Gangneung Green City Experience Center from Saturday to Sunday.

The event was designed to acquaint the students, who ranged from grades four to six, with software development and programming through a variety of fun and easy-to-approach activities and seminars.

Funded by the National IT Industry Promotion Agency (NIPA) and the Ministry of Science and ICT, and hosted by regional science-related agencies in Gangneung, Incheon and South Jeolla, the event was the third of its kind. It was meant to rear “talents competitive in a fast approaching new era and capable of leading the world,” said Kim Cheol-rae, director of the Gangneung Science & Industry Promotion Agency - one of the event organizers.

On the first day of the event, students took part in a seminar led by Na Hee-sun, a YouTuber better known by his internet alias Dotti, who talked about his job as an online content creator and gamer, and about online creativity.

“I could relate to Dotti’s words,” said Kim Yong-woo, a sixth grader who goes to school in Gangneung, Gangwon. “Though coding is difficult, I feel like I want to do programming in the future.”

In addition to the lecture, students got to participate in a bunch of immersive activities, like creating their very own slime toy using 3-D printed material or going on a virtual reality canoe adventure. 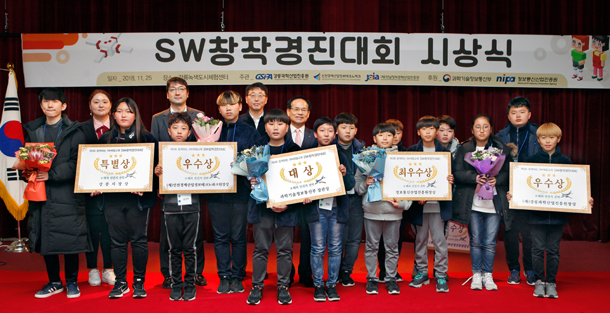 Bright-eyed winners of a coding competition during the Software Experience Event at the Gangneung Green City Experience Center pose for photo with event organizers on Sunday. [PARK SANG-MOON]

But the highlight of the two-day event was a programming competition held on Sunday morning, the culmination of the students’ hard work over the past two days.

Deceptively toy-like, the AsomeBot, whose name reflects its creators’ philosophy that “all children are awesome,” can be taught to perform a range of different actions like walking on its two legs or moving on wheels. To do so, students must connect the robot to a computer and run a coding program that guides them through the basics, even if they may be unfamiliar with the programming language.

Each pair held in their hand a uniquely decorated AsomeBot, colorfully adorned to distinguish them from others. The competition pitted pairs against one another to see whose robot would be the first to complete a maze designed especially for the competition.

The air was heavy with anticipation as dozens of onlookers crowded around the arena, nervously eyeing the competing robots.

For some contestants, the nervousness gave way to frustration as their robots collided with walls, failing to navigate the narrow corridors of the miniature labyrinth.

Other robots tripped on their own weight as their masters gaped on.

The fortunate few robots that made it to the maze’s center went into the second round of the competition. In this round, the robot that dances best would come out on top.

Some students mimicked their robot’s perfunctory movements in frustration, as if instructing the machines how to move.

Though each team was given only three minutes to get their robots through the maze and dance-off, each minute seemed like an eternity to the young coders.

Contestants’ scores were gauged through multiple criterion, such as how fast their robots made it through the arena, and how varied their dance movements proved to be. Students were also scored on how creatively they were able to decorate their robots’ exteriors.

By the end of the morning, the verdict was in. Seven pairs received recognitions for their programming skills and are being rewarded with a free trip to Japan before the beginning of winter break, during which they will tour a number of IT-related institutions.

“At first I didn’t know we would make it, but I’m happy we won,” said Maeng Hyeon, from South Jeolla.

Though only a handful got to go home with honors, the children looked as ebullient as ever as the award ceremony wrapped up. Many made new friends, and according to at least one student, Lee Yong-woo from Incheon, they got to go home having learned a lot about programming.

It is precisely such enthusiasm for coding that science educators hope to instill in the next generation, said Jang Su-jin, one of the event’s main organizers and director of the Regional Software Innovation Team, a core unit of the NIPA’s Software Industry Promotion Department.

“But from my experience with students, most are uninformed about software and have had little opportunity to get in contact with such materials. This event is meant to familiarize students in the provinces with programming and ultimately habituate them with the skill.”

Jung said that the Green City Experience Center - where a permanent programming and IT technology display is in place - is fast becoming a landmark in the Gangneung region as more people become interested in coding education. With programs like this past one, NIPA and the Science Ministry hope to expand programming education to more students in even more regions around the country through a variety of new projects.

“[By promoting software education] we hope to change misconceptions parents have towards the field,” Jang added. “We are producing the experts who will shape our country’s future.”