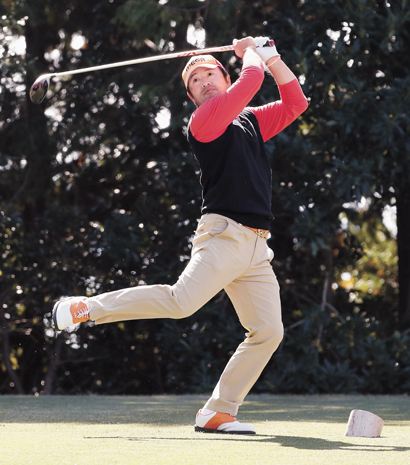 Choi Ho-sung watches his tee shot during the final round of the Casio World Open at Kochi Kuroshio Country Club in Kochi, Japan, on Sunday. [YONHAP]

Golfer Choi Ho-sung may have made headlines in the summer for his unique golf swing, but being a bit different paid off for the viral star, as he took home a win at the Casio World Open on the Japan Golf Tour (JGTO) on Sunday.

By shooting five under par, 67, in the final round, Choi finished the tournament at 15 under par, 273, for the weekend, one shot ahead of runner-up Brendan Jones.

“I knew this was going to be a tough fight,” Choi was quoted as saying on the JGTO website. “I must have a strong heart and mind. I made the 15-meter par putt on the second, and I told myself I can do it.”

Choi first hit the headlines at the Kolon Korea Open in June. His swing, dubbed the fisherman swing, quickly spread through social media and caught the eye of international press. Choi’s swing got so popular on social media that it was even commented on by former world No.1 Justin Thomas and fans started posting videos of themselves imitating the unique move.

The creation of Choi’s swing came from his effort to hit the ball further. Since Choi started golf later in life than his competitors, he thought of ways to hit the ball as far as the younger players.

“I thought if I made my swing ark wider, it might help,” Choi said. “I started golf later than many players. My body was too stiff, not a match to do a good golf swing. So, I had to find a way to overcome that and have a way to put power into my impact. That’s why I turn.”

Normally, a winner on the JGTO Tour event doesn’t receive much attention from foreign press, but Choi’s victory made headlines on sites like GolfDigest, Golfweek and Golf.com as it was hard to believe that he won the tournament with such a unique swing.

“If golf really wants to ‘grow the game,’ Choi needs to be given an exemption into all four majors right this second,” GolfDigest stated.