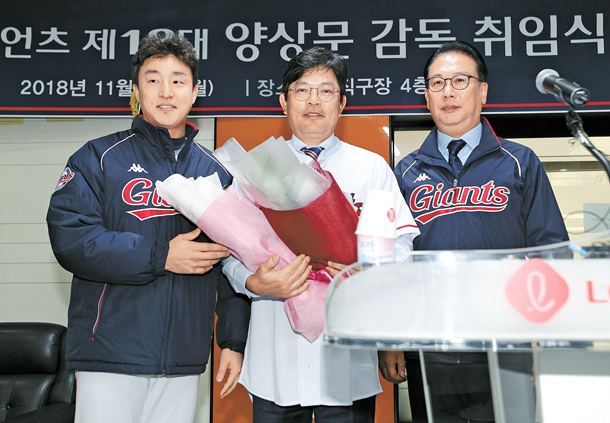 The Lotte Giants’ new manager said on Monday that he is determined to meet expectations of home fans with better performances.

Yang Sang-moon was officially introduced as the manager for the Giants and returned to his old job. Last month, he signed a two-year deal worth 900 million won ($797,616) with the Giants.

“This is the fourth time that I’ve come to work for this team,” Yang said at his inauguration ceremony at Sajik Baseball Stadium in Busan, home of the Giants. “I’ve received a precious opportunity, and I know what fans in Busan want from me.”

Yang was a pitcher for the Giants after joining the Busan-based club in 1985. The 57-year-old had his first managerial stint with the club from 2004 to 2005. He left to dabble at television commentary before returning to the Giants in 2009 as their minor league manager. He became their pitching coach in 2010.

In 2014, he moved to manage the LG Twins and worked as their general manager in the past season.

“I do feel pressure as a returning manager, but in life, you first have to try it,” he said. “I don’t think we have a weak squad. I think we’re able to make something happen, and I want to make it happen.”

Yang said he will “steadily” improve his team but didn’t specify his goal for the next season.

The Giants went to the postseason in 2017, but finished in seventh place this year with 68-74-2 (wins-losses-ties). The Giants especially struggled in pitching as their starting pitchers had the league worst 5.73 ERA last season.

“I don’t think our batting power is that bad among the 10 KBO clubs,” he said. “But through training, we need to improve our ways to score runs when we need them the most. We also have a task to secure lots of good pitchers.”

Yang said the Giants are interested in re-signing American pitcher Brooks Raley and right-hander Noh Kyung-eun, but didn’t reveal whether they will recruit free agents from other clubs.

Among the biggest names in this year’s free agency is Yang Eui-ji, a veteran catcher for the Doosan Bears. The 31-year-old is one of the KBO’s most complete catchers - an accomplished game caller and defender who can also hit for power and average.

But Yang Sang-moon said that he will first try to foster the Giants’ young catchers before thinking of signing Yang Eui-ji.

“I will first watch our four young catchers, and I believe they will grow,” he said. “Looking from the outside, they may not be sufficient for our club, but I will certainly make improvements and make sure that fans feel that there are no shortcomings next season.”

Yang acknowledged a good catcher can make a strong team as it can also lead to boosting their pitching power. But he believes that the opposite way can also work.

“People say a strong catcher makes a strong pitcher, but I think a good pitcher can also make a good catcher too,” he said. “Instead of strengthening our catcher position, I think we can make improvements by boosting our pitchers’ ability.”

Yang, meanwhile, said outfielder Son Ah-seop will serve as the team’s new captain for next season. He will replace Lee Dae-ho, who worked as the team captain for the last two seasons.

“I think Son is the most active player in this team who is always full of passion and energy,” he said. “Lee has been serving the captain role well, but we’re moving forward to make a team with vibrant energy. Lee also said he wants to give the captain role to other players, so that he can only focus on playing baseball.”