Jeonbuk lost the coach but kept the star

Jeonbuk lost the coach but kept the star 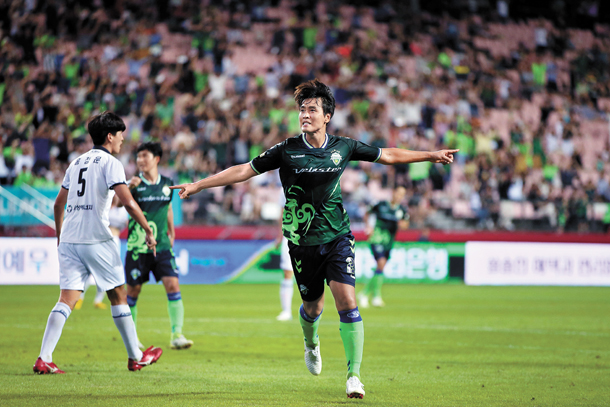 After signing another year with the club on Monday, Lee will start his 11th season playing in Jeonju, North Jeolla, next March. A month before Lee’s signing, the club’s long-time manager Choi, who had led the team since 2005, announced his signing with a Chinese club. As Choi and Lee both played a crucial role in leading Jeonbuk to become the league’s top club, many questioned whether Lee would stick with the club after Choi’s departure.

“With the help of manager Choi, we turned Jeonbuk into an elite team that every player looks up to and wants to be a part of,” Lee said. “When I think about him leaving, I feel empty.”

Although there had been rumors, Lee made it clear that he never thought about playing for a different club.

“Jeonbuk is my second home,” Lee said. “I was the most worried about having to play for a different club. Jeonbuk is that kind of a team to me.”

Lee’s 20-year football career has had its ups and downs. After making his K league debut with the Pohang Steelers in 1998, Lee briefly left to play in the European league.

When he made an attempt to play in the European league - one season with Werder Bremen and two with Middlesbrough FC - he failed to perform, and when he played for Seongnam FC after returning from Europe he couldn’t live up to expectations. Lee scored only two goals in 10 matches during the 2008-09 season with Seongnam.

The K League star got his groove back when he transferred to Jeonbuk in 2009. Since then, Lee has consistently scored more than 10 goals every season to set a new league record for most career goals.

Last year, Lee had the best season of his career. He joined the 70-70 club - an esteemed group of footballers who have scored 70 goals and recorded 70 assists in their career - and scored his 200th career goal in the K league. Lee is still the only player in the K League to join the 70-70 club. Aside from his league achievements, Lee also made his return to the Korean national football team in August 2017 for the first time in more than two years.

After an impressive 2017, Lee once again proved that age is just a number this season, scoring 13 goals in 34 matches throughout the 2018 season. With Lee, Jeonbuk once again won the K League 1 regular season title.

Lee also set a new personal record in the league. By playing in a match against Jeju United on Nov. 10, Lee played his 502nd match to set a new K league record for the most number of matches played.

By playing another season, Lee is expected to be the oldest player in the K League 1 as he will turn 40 in April. In addition to playing another year without any injuries, Lee has now set his sights on joining the 80-80 club.

“By making a lot of assists, maybe I’ll be able to become the K League’s first-ever player to join the 80-80 club,” Lee said.

To achieve such a record, Lee only needs 5 more assists.