As always, Key makes a statement with solo album

As always, Key makes a statement with solo album 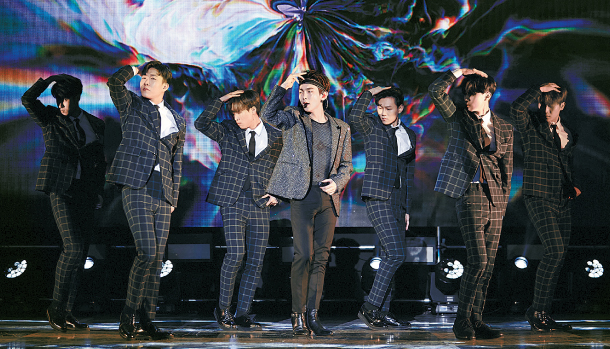 Key, center, from SHINee performs “One of Those Nights” off his new album at a showcase event held on Monday at Konkuk University, eastern Seoul. [SM ENTERTAINMENT]

After a 10-year career as a singer, actor, entertainer and fashion designer, Key from boy band SHINee dropped his first solo album on Monday.

“I didn’t want to rush into [producing and releasing] this album,” the singer said during a showcase on Monday. “I have been preparing this album for a year. The reason it took so long was because I did not want to give up my other activities. I worked on my songs whenever I had time.”

The album “FACE” is packed with R&B and electro-pop songs and features appearances from popular artists like Crush, Soyou and Vinxen.

“[While preparing for the album,] I thought about how I could get closer to listeners rather than producing songs in my style,” he said.

The powerful R&B lead track, “One of Those Nights,” featuring singer Crush, was played for the first time at the showcase, hours before its release.

“The song sounds powerful, but it’s actually a very sad song,” he said.

In the song, the singer admits that he is hurt by his lover who had left him and that he will “not pretend to be strong.”

“[The irony, however, is that] the man is actually pretending to be strong by crying out that he is not doing so,” the singer explained.

When asked what his favorite track off the album is, the singer chose the rock-pop song “Honest.”

“It’s funky and rhythmic - perhaps a little confusing because you don’t really know what the main melody is or where the chorus is.”

The song “This Life,” written by Key, features a message to listeners to enjoy every moment.

“I thought about what message I would deliver if I had to give up everything tomorrow. Then I thought that I would just thank everyone. [‘This Life’] is also a song that everyone can sing along.”

Towards the end of the showcase, the singer said that he does not regret his many years being a part of SHINee.

“I have almost never regretted working with the group. All those years have been valuable.”