Credit card commissions to be reduced

Credit card commissions to be reduced 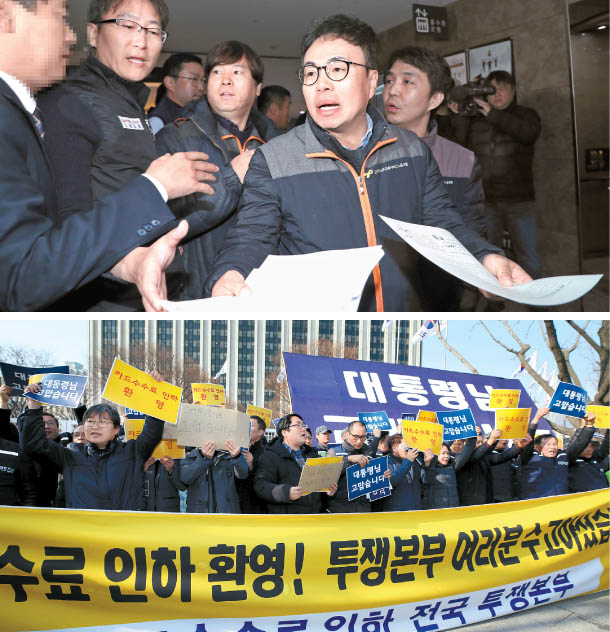 On Monday, the government and the ruling party agreed to lower credit card commissions charged to small businesses in an effort to provide them with some relief following the rise in the minimum wage and in light of slower economic growth.

The government estimates that roughly 93 percent of stores in Korea accepting credit cards - 2.5 million establishments - will feel the effects of the adjustment by the end of January 2019.

According to the Financial Services Commission (FSC), the credit card commission rate on small stores that generate annual revenue between 500 million won ($443,242) and 1 billion won will be lowered to 1.4 percent from 2.05 percent, a 0.65 percentage points cut. The commission rate on debit card payments will be lowered 0.46 percentage points from current 1.56 percent to 1.1 percent.

For those with revenue between 1 billion won and 3 billion won, the rate will be lowered from the current 2.21 percent to 1.6 percent, a 0.61 percentage points cut. For debit-card payments, the commission rate will drop from 1.58 percent to 1.3 percent.

“According to National Tax Service data, 33 percent of small store owners made between 1 and 3 billion won,” said Choi Hoon, head of the FSC’s financial industry bureau. “For the lowering of the commission rate to have a material effect, it was necessary to lower the rate for those making up to 3 billion won a year.”

Credit card companies, whose profits are already under pressure, are being affected by the move and are expected to try to shift the burden of the cuts onto others.

The credit card company labor union said in a statement released on Monday that credit card companies could face deficits as a result of the move by the government. The rate cut will reduce their take from commissions by 1.4 trillion won annually, more than the net profits of the companies last year.

The union said the government’s move will not only damage the credit card companies, but also bring harm to consumers.

“The government is forcing the credit card companies to accept this by reducing marketing expenses,” the union’s statement said. “This will reduce the benefits to the consumers, which will lead to a fall in consumption and reduce store revenue.”

The union warned that it will take action against the government and not stand idly by as commissions are changed.

According to a report by the Credit Finance Association, the accumulated net profit of seven credit card companies - Shinhan, Samsung, KB Kookmin, Hyundai, Hana, Woori and Lotte - between January and September amounted to 1.28 trillion won, which is 25.5 percent less than the 1.72 trillion won made during the same period last year. The additional cut to the commission rate will likely reduce net profits by between 700 and 800 billion won.

With the climate becoming challenging for credit card issuers, some of the companies have started to cut staff. Hyundai Card this month for the first time started to accept early retirement.

“We will work on improving sector’s competitiveness by altering the operating environment. This includes addressing excessive marketing expenses,” Choi Jong-ku, the FSC chairman, said. “We will make efforts so that credit card companies diversify income sources by developing in areas such as consulting.”

Credit card company marketing expenses over the years have been steadily growing. In 2015, they spent more than 4.8 trillion won. That number grew to 5 trillion won the following year and to 6.1 trillion won last year.

“The credit-card commission-rate reform in the short term could have a negative effect on profitability in the sector,” said Kim Tae-nyun, head of Democratic Party’s policy committee. “But in the mid-to-long term, it will help in improving the soundness of the companies.”