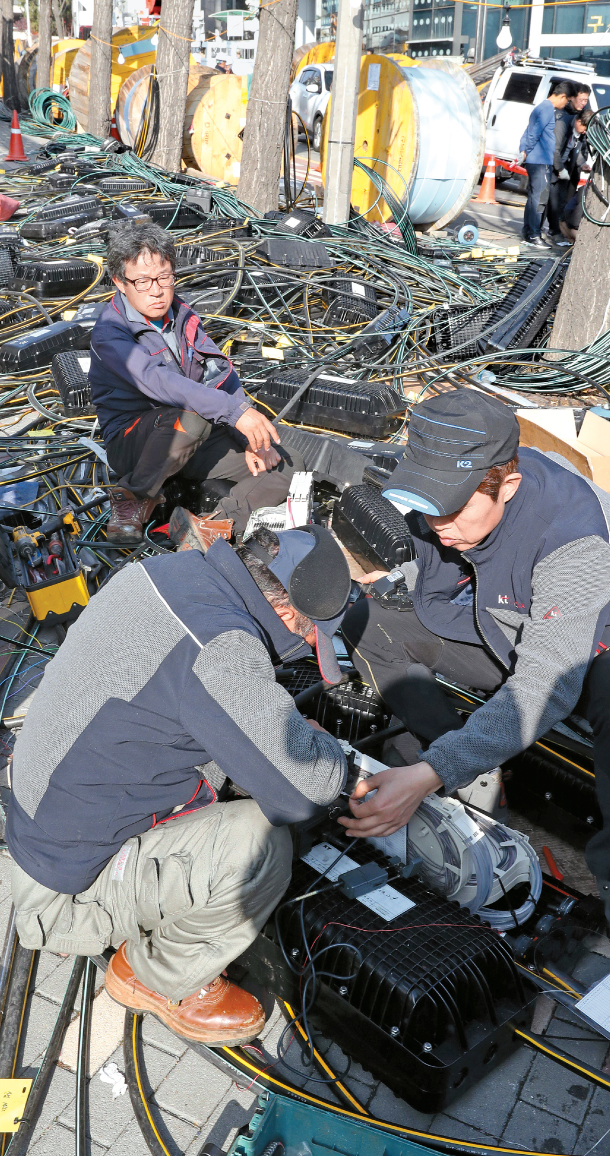 Workers at KT work on recovering communication networks on Monday in Seodaemun District, western Seoul, near the company’s center that caught fire. [YONHAP]

The Korean government Monday vowed to form a task force by the end of the month following the fire at KT’s switching center on Saturday. It will be tasked with preventing future telecommunications failures and preparing an effective response in the event another incident occurs.

“The company was negligent, and so was the government,” You Young-min, minister of science and ICT, told the Science, ICT, Future Planning, Broadcasting and Communications Committee of the National Assembly on Monday.

“We have learned a good lesson” from the accident, he added.

KT also announced compensation measures, saying it will waive this month’s phone bills - whether wireless or landline - for all KT subscribers living in the affected regions.

The blaze was extinguished at 9:30 p.m. Saturday, and restoration of services began Saturday evening.

The police and fire authorities began a joint investigation at 10 a.m. Monday.

You Young-min, minister of science and ICT, second from left, bows to attendees at an emergency gathering with CEOs of three mobile operators at the KT’s Hyewha branch in central Seoul on Monday. [YONHAP]

The police found in an earlier investigation on Sunday that 79 meters (259 feet) out of the total 150 meters of cable tunnel inside the switching center had burned, but they did not determine the exact point of ignition and the precise cause of the fire.

As of 6 p.m. Monday, 98 percent of the lost internet service has been restored. The recovery rate for mobile communications was 86 percent.

Out of 2,833 base stations for mobile services, 2,437 were operating normally, KT said.

More information about incident and the number of people affected should have been released immediately after the problem occurred, Minister You said.

He noted that mobile operators need to prepare in advance for trouble and have a detailed plan established.

KT announced its own follow-up plan Monday. It said it will install sprinklers in areas not required under current regulations to have them and step up monitoring of network facilities by installing closed-circuit TVs.

“We will install CCTVs and sprinklers as soon as possible, even in cable tunnels that are less than 500 meters long, which are not required to have them under the Fire Services Act,” said KT in a statement.

Should any disaster take place in the future, KT will cooperate with the Science and ICT Ministry as well as with its competitors, SK Broadband and LG U+.

Later in the day, Minister You met with CEOs of KT, SK Broadband and LG U+ - Hwang Chang-gyu, Lee Hyung-hee and Ha Hyun-hoi - at the KT’s Hyehwa Branch in central Seoul. The three mobile operators talked about working together to deal with emergencies.

“Telecom is a public asset, given that telecom operators utilize state assets - frequency - to do business,” said You during the meeting. “In this respect, tackling the entire problem by relying on a single, specific firm has limitations.”

He urged improving cable tunnels and building a backup system and said that both the government and the telecom firms should actively take an interest in the issue and cope with it decisively. “Follow-up measures are a critical matter that all three mobile operators should jointly address,” he said.